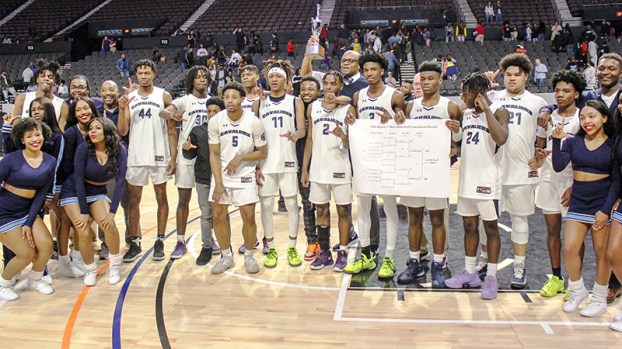 The Cavaliers celebrate with their coaches and cheerleaders after winning the Region 3A championship on Tuesday.

Lakeland boys’ basketball senior Shawn Mitchell envisioned the Cavaliers running into two Richmond-area teams at the Norfolk Scope on their way to the program’s first regional title since 1996.

On Tuesday night, the Cavaliers completed his vision by defeating Petersburg, a surprise runner-up at the No. 11 seed, by a count of 63-48.

“None of these guys were born (back in ’96). They’ve never been in this experience before. Definitely excited and looking forward to playing at least three more basketball games.”

Both teams Lakeland faced at the Scope had knocked the Cavaliers out of the playoffs in previous seasons, including Petersburg just one year ago.

“It’s not necessarily a get-back. We don’t want to be vengeful over the things that we’re doing. But it definitely worked out,” Wright added. “I felt playing on Saturday we got rid of the anxiety. We didn’t feel as nervous. Matter of fact, we were a little bit too lax with the turnovers and some of the things that occurred. I thought defensively, though, we did very well.”

Lakeland jumped out to a 7-0 lead and never looked back as their mainstays — the perimeter trio of Raymond Bellamy, Keimari Artis and Clint Wright Jr. — all thrived in the early going. Bellamy was their top scorer with 13 points on just three shot attempts from the field as he went 7-of-12 from the foul line while also collecting seven rebounds and three blocks.

“It’s a great feeling and a great feeling for the city of Suffolk,” said Bellamy. “We knew this was sort of a payback trip. We tried to force them to put the ball on the floor and make a bad pass. We all came out here with one goal to do this and we accomplished it by sticking to what the game-plan said to get this win as a team.”

Wright wasn’t sure what to expect from Bellamy, who three days earlier had seven blocks against Hopewell.

“We’re happy to have Ray because he did not practice over the last two days. We had him in ice tubs because of the calf,” Wright said. “Ray’s probably at about 75 percent, and what you saw tonight was not really the full impact what (he) brings to us.”

Up only 15-11 at the end of the first quarter, the Cavaliers outscored Petersburg 22-8 over the next eight minutes to build a double-figure lead that would never shrink to single digits in the second half.

More than just a young man with a future at possibly filling out a winning March Madness bracket, Mitchell supplied 10 points and five rebounds for a Cavaliers team that saw eight different players score.

“Shawn brings a tremendous amount of energy. He’s another senior that was here for the long haul and another guy that accepts his role. Shawn started the first half of the season, then we moved Lucciano Hamlin, our smaller point guard, into his position in the starting lineup. He knew what our ultimate goal was,” Wright said.

“The average player would’ve probably wanted to quit because he lost his opportunity, but Shawn and Tyshawn (Allen) give us an excellent 1-2 punch inside.”

Artis had nine points, putting him at 1,007 for his career, to go with five assists and four steals.

“I think we have to continue to play sound offense,” said Wright, in order for his team to reach VCU in a week and play for the state title. “Defensively, I think we’re going to be where we need to be. We can go from zone to man and disguise it fairly well. I want us to get better at recognizing what they see defensively, and then call their own offense. That’s the one thing we’re going to focus on the next couple days.”