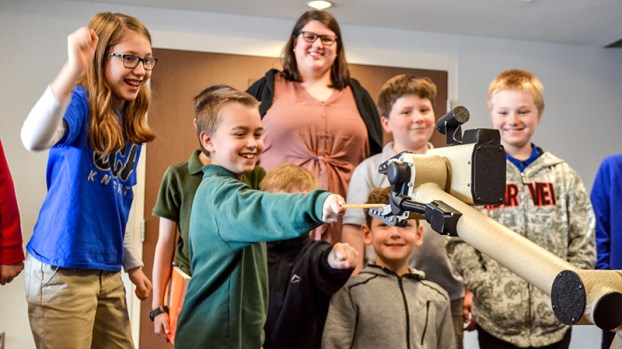 Suffolk Christian Academy Fourth Grader Zachary Taylor holds a pencil up to the arm on a LT2/F “Bulldog” tactical robot.

Fun with robotics at SCA

Students at Suffolk Christian Academy were treated to fun “Robot Day” demonstrations on Feb. 28, and the school also received a donation from SuperDroid Robots Inc.

The demonstrations were given by Aaron Cockrell, who assists in shipping and logistics for SuperDroid Robots Inc., which is based in Fuquay-Varina, N.C. The company specializes in custom robotics and builds robots in-shop for tactical and inspection purposes. According to Susan Payne, owner and chief financial officer of SuperDroid Robots Inc., the company has sold more than 10,000 robots and parts over the past 20 years.

Aaron Cockrell was in SCA’s first graduating class in 2010, and his sister and fellow SCA graduate Abby Cockrell teaches STEAM and computer classes at the school. Abby Cockrell spoke to her brother last fall about introducing robotics to the school’s newly-formed STEAM class this year, and his company was happy to oblige.

Aaron Cockrell was able to bring a few of their advanced robotics for the demonstrations on Feb. 28. Furthermore, the company donated Tamiya Robot Kits to the school, which will be used by second-through-fifth-graders in STEAM class, Abby Cockrell said.

“As the paradigm shifts to acceptance of more robotic applications in industry and personal use, students need to develop basic skills in manual dexterity and critical thinking,” Payne wrote in an email Monday. “By donating robot kits to Suffolk Christian Academy, we hope to spark interest in robotic concepts. Donations like this help to secure an educated and trained workforce for the future.”

More than 200 SCA students were wowed by the machinations in store for them at the demonstrations throughout the school day.

Students were excited to watch the movements of the arm on an LT2/F “Bulldog” tactical robot. This one-armed bot carefully grabbed pencils out of their hands, with Aaron Cockrell manning the advanced controller for the machine.

The students were also impressed by the sleek inspection bot, painted silver and black and small enough for crawlspaces and other tight spaces.

“They were just super stoked,” Abby Cockrell said. “You could see it on their faces. They were bright smiles and wide eyes, and super curious.”

Aaron Cockrell also had the students draw their own robot designs on pieces of paper. Some of them may have been far-fetched, like a robot that would do their homework, but that creative spark is the start of a lifelong interest in robotics.

“It all starts with a creative mind,” he said. “I think a lot of times people think, ‘I can’t do this,’ but when you are creating you start realizing, ‘Hey, what I’m learning in school actually means something.’”

He said he had a great time coming back to his old Suffolk stomping grounds to show the students at SCA how their STEAM lessons can be applied to an exciting industry that’s constantly growing, and his sister was very pleased with her students’ enthusiasm.

“STEAM is all about just exposing kids early to the different parts of STEAM — to science, technology, engineering, art and math — and how that is incorporated in everyday life,” Abby Cockrell said.

It’s all about showing them how they can get involved and what they need to do to get there, and lessons like Robot Day are the “building blocks” for that foundation, Abby Cockrell said.

“It’s just exposing them to the subject, inspiring them and showing them what could be,” she said.

V.A.U.L.T.-ing the lives of children