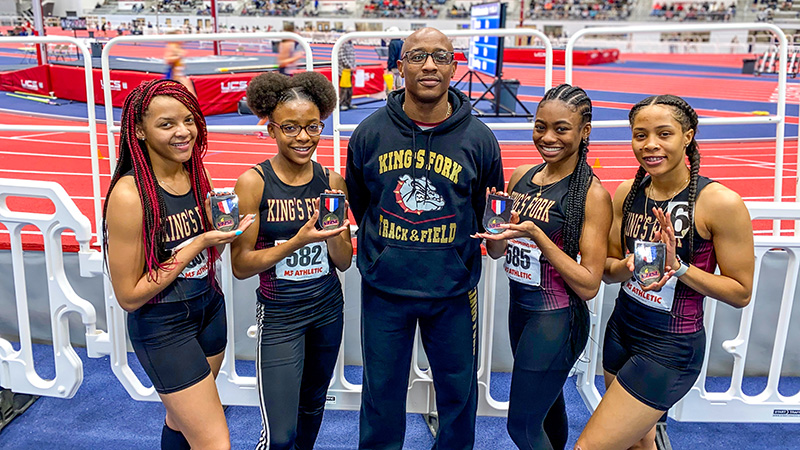 The King’s Fork High School track and field team had some notable performances at the Class 4 state meet, including a state title in the girls’ 4×200 relay.

The Bulldogs added a third state title in an event in the school’s history after winning the girls’ 4×200 relay Tuesday afternoon. Asia Powell, Deja Ward, Courtney Johnson and Kayla Lee headlined the event as they ran a time of 1:45.13. That marked the best time in Class 4 for this indoor season and something about which Coach Adrian Young was more than ecstatic.

“I was able to watch our athletes put their entire season’s work into play,” Young said. “They performed extremely well. They handled the pressure well, and they stuck to what got them there.”

King’s Fork is peaking at the right time, as that same group of runners took the region title in the same event just a couple weeks before the state meet. As they went into the state meet, the Lady Bulldogs had the second-best time. Powell ran the first leg with Ward following, and Johnson ran the third. Lee brought it home for King’s Fork on the anchor leg.

“The girls were focused,” Young said. “It was all about focus. No matter what the event is, it’s about the technical details of the event that’ll give you the success you want. Those girls were really able to zone in and run a state-best time.”

Even though the state title was the highlight of the meet for the Bulldogs, they still had more strong performances across the board. Lee finished in fourth in the 55-meter dash. Tanigha Costley and Kierra Souza had top-20 finishes in the high jump. On the boys’ side, Robinson Alexander finished third in the long jump, while Nate Edghill finished top-20 in the state in the 1,000 meter-run. Alexander came into the meet ranked 11th and was able to finish third.

“We weren’t able to let the environment overtake us,” Young said. “Instead, we were able to focus and do our best.”

Young gave a lot of credit to his coaching staff for having the athletes focused and prepared all season long. King’s Fork can now build on a strong indoor season and carry it over to the rapidly approaching outdoor season.

“We have an incredible coaching staff,” Young said. “We were able to balance all of our talents to help this program.”