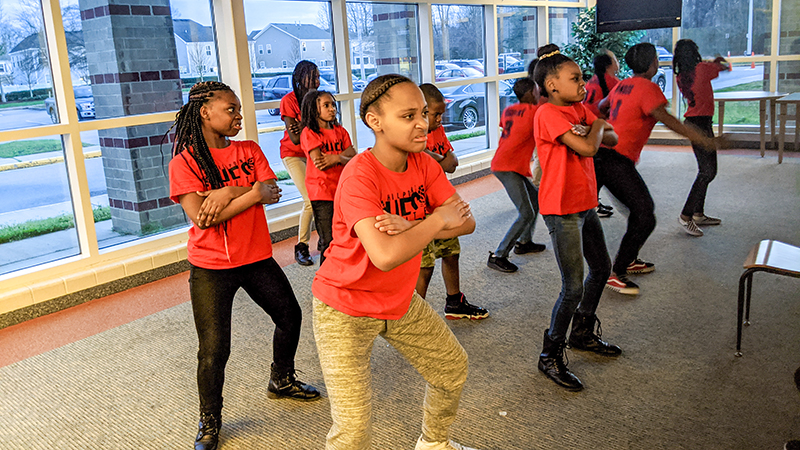 Members of the Hillpoint Elite step team practice a routine during a recent afternoon. The team, in its second year, typically practices twice per week and has performed at various events at Hillpoint Elementary School.

Imagine about a half-a-dozen fourth- and fifth-graders shouting these words:

Then add another half-dozen, in their loudest voice, with this:

“Hillpoint Elite, and we will not be beat.”

After about a minute of stepping and chanting, they stop, and each stepper, hunched over, makes a face. Their coaches, second-grade teacher Kia Wiggins and fifth-grade teacher Shante Lyttle, want them to hold their pose.

“Keep your face. Breathe in with your nose, out with your mouth.”

Now step back to the beginning.

During a holiday sing-along in 2017, Wiggins energized Hillpoint Elementary School with an example of what stepping is. The following year, she and Lyttle, who both have extensive step team backgrounds, started a team for Hillpoint’s fourth- and fifth-graders, aiming to bring step culture to the school and provide them with the values they believe it instills in them.

They tick off a litany of them: discipline, time management, organization, memorization skills, teamwork, physical fitness, fun, laughs, love and a family atmosphere. The purpose of the team, they said, is to promote academic and behavioral success.

“We began the Hillpoint Elite step team because we saw the need of a program outlet for our students,” Wiggins said. “Many students are not involved in extracurricular activities, and we decided to provide them with a rigorous after-school activity — step.”

Now in its second year, the Hillpoint Elite step team has the experience of numerous performances and is poised to enter its first competition later this month.

There’s rigor to it in and out of the classroom.

In the classroom, the Hillpoint Elite steppers need to behave, get good grades and be a positive role model.

“Now that I do step, I know that I can’t get in trouble, or else I’m going to get a consequence in step practice,” said Constance Brown, a 10-year-old fifth-grader who has been on the team both years.

Though she doesn’t know if she’ll continue with it after this year, Constance said she wanted to get involved with the team after seeing Wiggins step.

Torian Barnes, 11, has also performed for both years and recalled Wiggins’ performance for the school — “she had a lot of energy in her face.”

They practice for nearly two hours twice per week, and will practice the majority of the week prior to a competition, in which they will be judged on accuracy, precision, voice level, creativity and their enthusiasm and energy level while stepping.

“It really keeps them on track,” Lyttle said. “It keeps them accountable.”

They have performed at King’s Fork and Nansemond River high schools, and at Hillpoint for the Holiday Sing Along, Trunk or Treat, pep rallies and the Black History Show.

Wiggins began stepping as a teen, doing so on teams in high school and college, and also coaching teams afterward. Lyttle started stepping around 10 years old with a group at her father’s church.

“They introduced step to us, and I fell in love with it, and I just kept going,” Lyttle said.

Wiggins and Lyttle said they have received extensive support for the step team, starting with Principal Catherine Pichon on through the rest of the staff, students at the school who want to be a part of the team and the parents of team members who have helped to create uniforms and props. The team also holds several fundraisers throughout the school year to help pay for uniforms, shoes, props and the team’s end-of-the-year party. The team also has its own DJ in computer lab teacher Tiffany Mason, who also helps with the team’s fliers, shirts, voiceovers and music.

“She significantly helps our team by helping the coaches’ visions become a reality for each and every show,” Wiggins said.

The step and life skills the two have gained are things that drive them to have members of the Hillpoint Elite team to do the same. They hope to see the program expand to other schools throughout Suffolk, including in middle and high school, but they’re eager to see how their steppers perform at their first competition March 28 at Crestwood Middle School in Chesapeake.

“We hope to expand step culture here at Hillpoint, as well as other schools in SPS,” Wiggins said. “It would be great to have a district-wide step competition, so that students at all levels — elementary, middle and high school — may compete.”