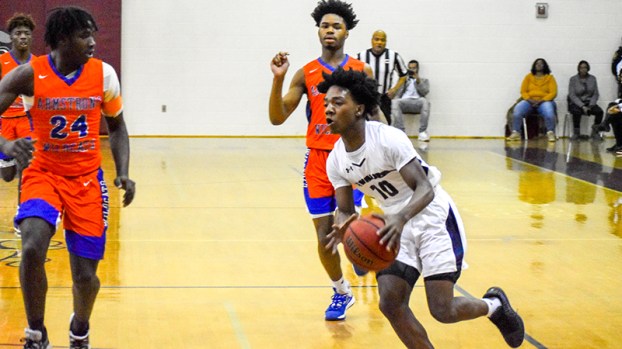 Luciano Hamlin looks to make a play in the Cavs state quarterfinals matchup.

Cavs to host again after win

The Lakeland High School boys’ basketball team is ready for the VHSL state semifinals after a win last Friday over Armstrong High School.

The Lakeland boys’ basketball team was able to take care of business against Armstrong High School and is headed for a matchup with Western Albemarle High School. Against Armstrong, the Cavs were able to get a lot of the looks that they wanted, but unfortunately, they weren’t able to get as many of them to knock down. Regardless, the Cavs found a way to win the game 60-52.

“Armstrong brought out the best in us,” Coach Clint Wright Sr. said. “They were a good matchup. I thought their defensive matchup was strong. They played a valuable role in us not getting and making the shots we wanted. But we were able to close out the ball game.”

Keimari Artis led the way for the Cavs with 18 points.

Next for Lakeland is a matchup with Western Albemarle at King’s Fork, which will put the Cavs in the Class 3 state championship game for the first time in school history if they come out with a win.

The Cavs feel good about where they are mentally right now. The senior leadership they have and the amount of experience they have playing basketball together should work in their favor.

“We are going to go into the matchup looking to polish the apple,” Wright said. “We have been able to play different styles throughout this season, and we feel like every team we play along the way, we match up pretty well with. The senior leadership on this team is very good, and we are all confident in ourselves right now.”

Win or lose Tuesday night, the Cavs will play their last game in the city of Suffolk for this season. The Cavs are appreciative of being in a home atmosphere with a chance to play in the state championship.

“We have the opportunity to do something that hadn’t been done in a while,” Wright said. “The city of Suffolk loves their basketball, and they love to support. We want to give the city something to be proud about it.”