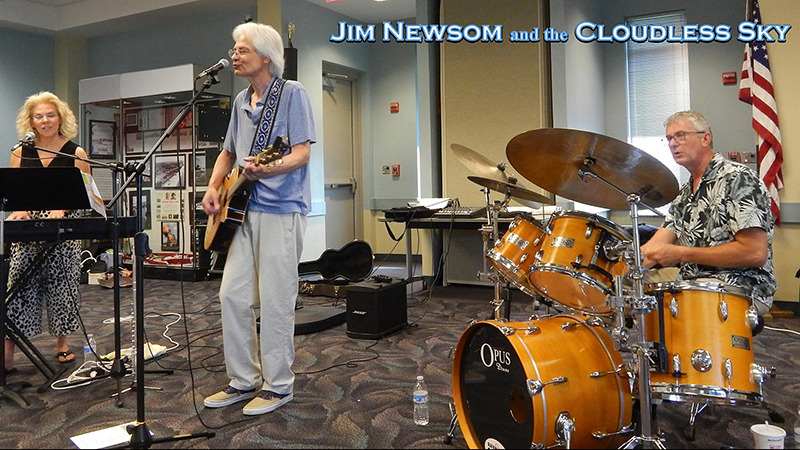 The band “Jim Newsom and the Cloudless Sky” will perform Friday evening at the Suffolk Center for Cultural Arts in downtown Suffolk. (submitted photo)

Accomplished musician and Suffolk High School alumnus Jim Newsom will enjoy a special homecoming when he performs at the Suffolk Center for Cultural Arts on Friday.

“Jim Newsom and the Cloudless Sky” will perform a concert Friday evening at the Suffolk Center, 110 W. Finney Ave. The concert will begin at 6:30 p.m.

According to jimnewsom.com, Newsom is an award-winning singer, songwriter and multi-instrumentalist. He’s recorded eight albums, including his latest release, “New Set of Dreams,” in 2018. His band includes Norfolk-native Gail Keller Smith on keyboards and Virginia Beach resident Rick Jebavy on drums.

Newsom has been a professional musician for more than 40 years. He’s led rock, jazz and acoustic bands and played hundreds of solo dates, and his talents as a performer have become well-regarded throughout southeastern Virginia, his website states.

“Jim Newsom and the Cloudless Sky will delight guests with a diverse mix of sounds, styles and lyrical topics that stands out above the crowded mass of contemporary musical conformity,” the Suffolk Center press release states. “The evening will have a night club vibe — creating the perfect date night or relaxed evening with friends. The Plaid Turnip restaurant will offer a variety of tapas and dessert options, and the center will have beers and wines available for purchase.”

This year is the 50th anniversary of Newsom’s Suffolk High School graduation, and on Friday he will play in his old high school building.

Newsom was born in Chattanooga, Tenn., but grew up in Suffolk, and his childhood home was just a few houses down the street from the old Suffolk High School, he said in a phone interview Friday.

“That’s the building I spent a lot of my happy times, you could say,” Newsom said.

Newsom graduated from Suffolk High School in 1970, and he helped to transform the school building into a cultural arts center more than three decades later. The press release states that he initially raised funds and garnered support on an alumni advisory council and then served as a member of the Suffolk Center’s Board of Directors when its doors opened in 2006.

His experiences in Suffolk shaped him as a person and continue to inspire him as a song writer.  For instance, he wrote his song “Fender Rhodes Piano and a Jesus Handle” about his summer in 1971, just after his freshman year in college.

He was working in a local factory, making parts for peanut pickers during the day, while practicing with his band at night in the choir room of St. Paul’s Episcopal Church in downtown Suffolk, where his late father was the rector.

He said that his life story from age 11 onward was written in this area of downtown Suffolk.

“I was not born in Suffolk, but I’ve always called Suffolk my hometown,” he said.

Newsom plans to put smiles on people’s faces when they come to his show on Friday, when he and the band will play the hits from his catalog of tremendous songs. The musician will also interact with the Friday night audience and share stories from his Suffolk years, like playing on the Suffolk High School varsity basketball team and other fond memories.

“In general, one of my phrases is to put a smile on the face of the world,” he said. He said that people have enough negativity going on in their lives, and that he just wants to provide a fun, uplifting experience for the audience.

Tickets for the Jim Newsom and the Cloudless Sky concert on Friday evening are $17 in advance and $23 the day of the event. Call the Suffolk Center for Cultural Arts box office at 923-2900, go online to suffolkcenter.org or visit the Suffolk Center at 110 W. Finney Ave.