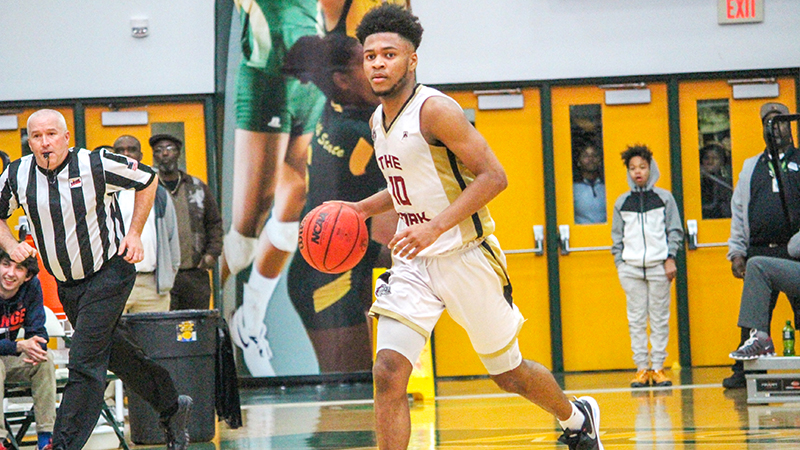 King’s Fork High School sophomore guard Jayden Epps brings the ball up the court on a night where he scored a game-high 30 points, 21 of which came after halftime, to help his team advance in the state tournament.

With less than four minutes to play in their VHSL Class 4 Tournament quarterfinal game at Norfolk State University on Friday, the King’s Fork Bulldogs trailed 56-55 in what was a back-and-forth affair. Sophomore guard Jayden Epps drained a three-pointer to give them the lead. Seconds later, Epps and teammate Ryan Hite — a freshman guard also playing in his first ever state playoff game — dove on the floor with a Monacan player, battling for a loose ball.

Officials yelled jump-ball with the possession arrow pointing towards King’s Fork. From there, the Bulldogs didn’t trail again and held on for a hard-fought 66-63 win to keep their dream of a state title alive.

“Fifty-fifty balls will get you home. We pride ourselves on it, and we needed to have it,” said King’s Fork Coach Rick Hite. “I thought having Jayden Epps on our side, we would find a way. But that was a pivotal play.”

Epps certainly proved to be a difference-maker, pouring in 14 of his game-high 30 points during the fourth quarter. No other player on the court scored more than 15 points, with the next closest Bulldogs player in the scoring column — Quentin Livingston — tallying seven points.

“We came out kind of slow, and we were going through the motions. A lot of guys haven’t been on this stage before, so there were going to be butterflies and jitters. We knew we had to come out in the second half and do better. We had to get stops and that led to our offense,” said Epps, who also finished with six rebounds and four assists.

“All year, we’ve been playing against big, tall teams, zone defenses, man-to-man. We’ve been preparing for that all year. Conditioning is very important, because I know most of the time I’m not going to come out of the game. So I can’t get tired, have to play defense on the best man and do my part on offense also.”

King’s Fork overcame 2-of-17 shooting in the opening quarter as Monacan led 13-9 through eight minutes of play.

“We had to settle down. They did a really good job, and we knew what they were going to do. Knowing it is one thing, but getting out there seeing their length up close and personal is a different thing,” Hite said.

“No doubt about it, they’re hard to beat in a half-court game. We wanted to try to get some stops and run. I thought we did that in little pockets in the third and fourth quarter, which ultimately got us the lead and kept them at bay a little bit.”

Even when the Bulldogs opened the second period on a 6-0 spurt — thanks to a pair of assists, a steal and basket by Epps — Monacan stayed within three by halftime and two points near the end of the third period.

“At the end of the day, they’ve been there like five out of six years. They have state experience and have won it,” Hite said. “I reminded the guys that they’re not going to be intimidated by the stage or by King’s Fork. We had to step up, make a play, trust each other and trust the system.”

One of the pluses for King’s Fork down the stretch, besides having Epps, was their depth. The Bulldogs used 12 players.

“We had to,” Hite said. “Honestly I could’ve (played) 13 or 14 guys. Javon ‘Hollywood’ Taylor could’ve played, and he can play. I knew we were going to play a lot of guys just from experience. I told them to be ready. We had a great week of practice. We have guys that I trust and at the end of the day they came up big for us.”

A win on Tuesday night over reigning state champ George Washington of Danville (20-8) would land King’s Fork (23-3) in Friday’s state championship game. The semifinals will be back at NSU’s Echols Hall.

“It’s a long court with the stadium effect. A lot of our guys psyched themselves up early and it’s tough,” Hite said. “Part of it is we hadn’t played in a week, so we had to get that rust off of us. Every time you play on it, it becomes a little easier. Those four quarters of experience will go a long way for our guys.”

But as King’s Fork’s floor general pointed out, they can’t repeat the way they opened the quarterfinals.

“We’ve got to get off to a better start. We also have to rebounds and play defense,” Epps said. “We just have to fix that up, trust each other more and we’ll be fine.”