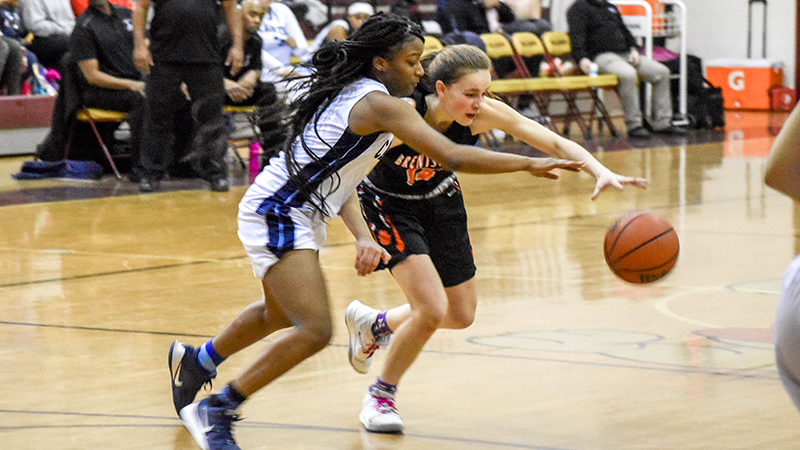 Kemonye Canady goes for a steal in the Lady Cavs state quarterfinals win.

Since reaching the region championship game, Lakeland has made history every game they have played in since. They hosted Brentsville District last Friday and earned a 45-35 win. It was a win that showed this young Lady Cavs team is a serious contender to make a run in the state playoffs.

“The girls gave great effort, especially on the defensive end,” Coach Daryl Rountree said. “It was a tough game, and we adjusted to our situation and played some lockdown defense to win that game.”

Lakeland is now set up for a matchup with the reigning state champions, Spotswood High School. The matchup between these two teams will determine who gets a shot at the state championship game this Friday, and it will be a true test for this young Lady Cavs team who will need a well-rounded effort to get the job done.

Lakeland’s regular-season schedule playing in a tough district explains why they feel they are more equipped than any team left in their state bracket to win a title.

“It gets tougher and tougher from here on out,” Rountree said. “But we are battle-tested. It’s not a lot of things we haven’t seen before. We have played a lot of basketball against very good teams, and that’s helped prepare us for this opportunity.”

The Lady Cavs will be back at King’s Fork Tuesday night, where the support undoubtedly helped lift them in their quarterfinal’s matchup last Friday. Win or lose, this season will go down as the best in Lakeland girls’ basketball history. However, the Lady Cavs have bigger plans for this season and will be ready for a tough challenge come Tuesday night.