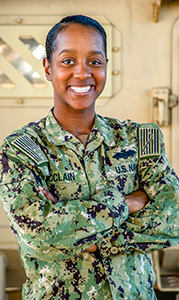 “We Build, We Fight” has been the motto of the U.S. Navy’s Construction Force, known as the “Seabees,” for more than seven decades. The Navy Seabees are an elite group of personnel trained in both combat and the craft skills of the construction industry.

Ensign Mia McClain, a native of Suffolk, builds and fights around the world as a member of a naval construction battalion center located in Port Hueneme, Calif.

McClain is serving as a Navy company platoon commander, who is responsible for personnel, security and administrative duties for the command, to make sure everyone is trained and able to complete the mission.

“We escort personnel from point A to point B during their mission,” said McClain. “My job is to make sure they remain safe until they return home.”

Building in austere environments can be a challenge. Fighting in harsh conditions can also be a challenge. Building in austere environments while fighting in harsh conditions takes a special kind of person with a great deal of perseverance and determination, according to officials with the U.S. Navy History and Heritage Command. These are the kinds of people being trained at Port Hueneme, to provide crucial support to Seabee units deployed around the world.

The jobs of some of the Seabees today have remained unchanged since World War II, when the Seabees paved the 10,000-mile road to victory for the allies in the Pacific and in Europe, said Lara Godbille, director of the U.S. Navy Seabee Museum.

“I enjoy the people that I work with every day,” said McClain. “It is a very small and diverse community.”

Seabees have served in all American conflicts for nearly 80 years. They have also supported humanitarian efforts using their construction skills to help communities around the world following earthquakes, hurricanes and other natural disasters.

McClain is a 2014 Nansemond River High School graduate. She also graduated with a bachelor’s degree in civil and environmental engineering from Virginia Military Institute in 2018.

According to McClain, the values required to succeed in the Navy are similar to those found in Suffolk.

“I learned how to solve problems,” said McClain. “In the Navy, sometimes you have to know how to make something out of nothing.”

Port Hueneme is the West Coast homeport of the Navy’s Seabees. It’s one of five learning sites in the Center for Seabees and Facilities Engineering domain. They train and develop sailors, soldiers, airmen and Marines in construction trades and military skills for Department of Defense operating forces to accomplish contingency and peacetime construction, chemical, biological and radiological operations, and humanitarian assistance missions worldwide.

Port Hueneme and the men and women who serve there play a key role in the Navy’s broader mission of protecting American interests on the world’s oceans.

According to Navy officials, maintaining maritime superiority is a vital part of a Navy that is present today and prepared for tomorrow. The impact affects Americans and their interests around the world, as more than 70 percent of the Earth is covered by water and 90 percent of all trade travels by sea.

The foundation of the Navy the nation needs includes a focus on warfighting, warfighters and the future of the fighting force.

“I am confident that we will maximize the Navy we have today while delivering the Navy that our nation will rely upon tomorrow,” said Adm. Mike Gilday, chief of naval operations. “We will do so with urgency. Our fleet will be a potent, formidable force that competes around the world every day, deterring those who would challenge us while reassuring our allies and partners.”

Though there are many ways for sailors to earn distinction in their command, community and career, McClain is most proud of setting her battalion’s record for earning the Seabee combat warfare qualification pin.

“I set this goal when I first arrived at the command,” McClain said. “A lot of people doubted that I would be able to get it in under four months. I was very proud to get it done and be able to say I have the record.”

Serving in the Navy is a continuing tradition of military service for McClain, who has military ties with family members who have previously served. McClain is honored to carry on the family tradition.

“My dad is a retired master chief in the Navy,” said McClain. “Just seeing the happiness and joy it brings to my father makes it all worth it. Family is a big part of my life and I enjoy being the one who carries on that tradition.”

As a member of the U.S. Navy, McClain, as well as other sailors, know they are a part of a service tradition providing unforgettable experiences through leadership development, world affairs and humanitarian assistance. Their efforts will have a lasting effect around the globe and for generations of sailors who will follow.

“It is an honor to serve as a Seabee,” McClain said. “The community is so small; it can be hard to get into. I am proud to do my part and represent the Seabees.”