A strong lure for fishing 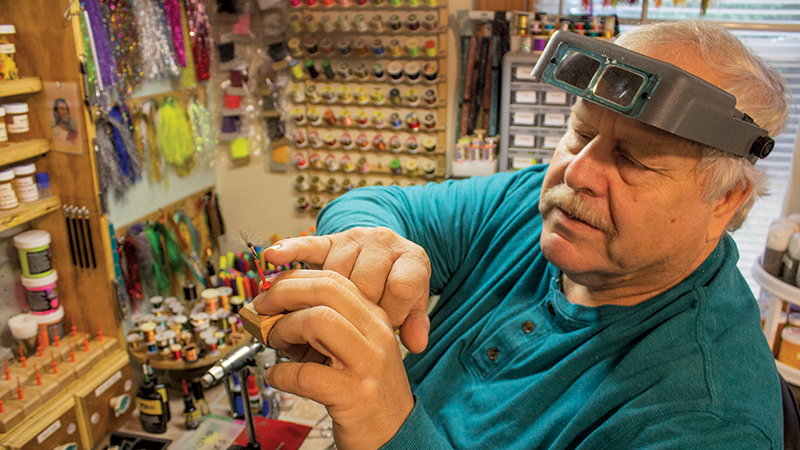 As a child, Alan Schubert would tag along with his father on fly fishing trips to Back Bay.

His father, Alfred Schubert, would wade in the water to fish and pull his son in the 24-foot boat behind him.

The lure for both was strong nearly 60 years ago when they were out on the water together.

And the lure is strong now in the memories of the son, tying together past and present.

But it was not until 2014 that 66-year old Alan Schubert, who lives off of Whaleyville Boulevard, got into the intricacies of tying his own flies.

That’s when he started watching videos on it, and the converted bedroom-turned-workspace got a lot more organized over time with binders of records of each fly he tied — nearly 12,000 now — as well as all the feathers, threads and other materials he uses in his corner of the workspace that he shares with his wife, Connie, an accomplished sewing master in her own right.

“I tied flies before that, but not like I’m doing now,” he says. “Just one or two when I needed something. And I’d use a cork and whittled it down, just a piece of feather I found somewhere, just to do something.”

Schubert got into making the ties, though, because it was less expensive than buying them, and because it caters to both his creative and meticulous sides. He says he couldn’t make the flies without either quality.

“That was my job at the city,” says Schubert, who worked as a land surveyor, a traffic engineer and also in public utilities before he retired in September 2018. “I reviewed plans, and I kept all the archives for the department, and so, I’m very organized in that kind of way. On my computer, I’ve had everything I’ve ever spent on this stuff, and who I bought it from, and all the pictures and all the images, and everything that I’ve tied.”

It’s the only way he could make the ties, and do as many as he does.

“Otherwise it’d be a total disaster up here,” he says.

Each binder has a table of contents and then an image of the fly. Without instructions to make many of the flies, he says it’s up to each individual to figure out how best to re-create it. Schubert watches the videos, makes notes, and then types them up as he prepares what he needs to make that particular fly. Each fly he makes isn’t an exact copy, just his rendition of it.

“It’s just very relaxing for me,” Schubert says. “And I love that there’s so many different flies that you can tie. There’s literally thousands, and they’re all different.”

It’s satisfying for him to watch someone else use a fly he’s tied to catch something, and he likes catching something from his own fly, too.

“When you go out and catch a fish on a lure that you made yourself,” he says, “that’s the best.”

It’s hard not to think of his father when he puts together the flies, and then uses them on his fishing trips. But it’s when he goes down to his garage to shape materials with the lathe that his father’s influence comes to the fore.

The lathe was handmade by his father some 45 years ago, and it gets a regular workout.

“Every time I use it, I think about him,” Schubert says. “He made it for me shortly before I moved out when I was 20. My dad was an awesome guy.”

It takes a high level of imagination to be creative, his wife says, and make the variety of ties necessary to work in the region’s waters. It also takes a level of detail and organization to keep track of all the materials he uses to make them.

They sit together a lot in their shared workspace, and she talks with pride about what he did to create it. He notes the variety of material he’s collected over the years, marking them all in labeled drawers and clear boxes to make finding them easy. And he goes far and wide to get them.

“I like using all kinds of different materials. I find stuff in fabric stores, everywhere, Walmart, Michaels. I spend more money in Michaels than she does,” Schubert says, laughing and looking to his wife.

For instance, they both use spools of thread, but his is different. While hers is a sewing thread, his is a polyester thread — a thousand little, seemingly invisible strands, he said. He has many different types of feathers from different birds and uses many different materials, including wood and flip-flops, to make his flies.

He taught himself how to tie flies the modern old fashioned way — through YouTube videos.

Schubert watches experts such as Davie MacPhail of Scotland — he ties what he describes as “super fancy trout and salmon flies” — and Barry Ord Clarke of England.

When he gets going on making flies, Schubert can get lost in his work for hours at a time.

“I watched a guy do a video of this particular fly — it’s a Japanese-style fly that I’m doing right now,” Schubert says. “I took notes and then I typed them up, so at the top is the material I’ll need to tie it, and then below is how I will tie it. So, I do that on every fly.”

Don’t believe him? Just pore through his binders, which date back to when he got serious about tying flies — 2014. For each fly, he has photos and instructions on how he does them, and he has each one in a binder on his shelf. They are also backed up on his computer.

Those 12,000 flies he’s tied represent about 700 different types, and he ties about a dozen at a time. Different ones will be used to catch different kinds of fish in different conditions.

“I feel proficient at it,” Schubert says. “There’s still some flies that I don’t tie yet that the pros do.”

Some are still a challenge, such as ones with deer hair wound around a hook — “I haven’t mastered that yet” — and others, such as salmon flies, that are cost prohibitive for him to do.

He gets to use his creations Friday, except when it is cold. He has a few favorite places, including the lower Chesapeake Bay, a small private lake, and yes, like he did when he was young with his father, Back Bay.

But once out on the water, that’s the one area he’s not as detailed in tracking.

“I’ll just bring out what I want to use that day, and then, if I didn’t tear it up, I’ll put it right back if nothing hit it or nothing struck it or I didn’t catch a fish with it,” Schubert says.

That just gives him that much more incentive to get back in the workroom and create more flies.

“Every time I find a new one, I buy it,” Schubert said. “I’ve used a lot of those, and they work really well.”

He’ll think often about his father as he’s tying flies, and some of those thoughts he’s turned into stories. He’s not short of them, and his wife notes that his humor comes through.

“It’s mostly stuff from my childhood and youth, the stuff that dad and I did,” he says.

It’s in those ties that have bound past and present.