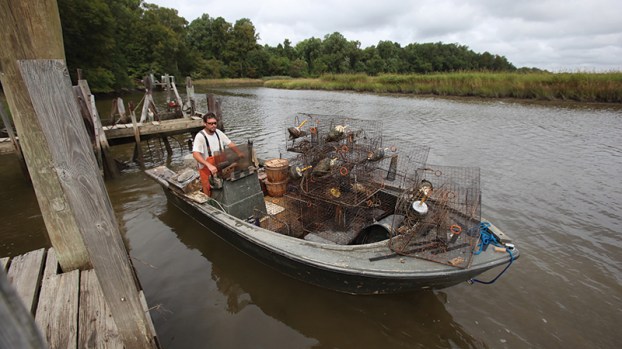 Memories at the Marina

A narrow lane winds from Godwin Boulevard, past fields, flocks of wild turkeys and a century-old farmhouse. Fields turn to woods as the unpaved road slopes downhill to Reid’s Ferry Creek, an offshoot of the Nansemond River. Creek waters lap against the pilings and tired remains of what was once a flourishing marina — the first, some say, in Suffolk.

Three pickup trucks sit in a parking area that, during the 1960s and 1970s, filled regularly with dozens of pickups, boat trailers and a few campers. Those were the days when Paul Brady saw his dream of a well-used marina come true.

Brady grew up in Port Norfolk, a vintage Portsmouth community on the Elizabeth River. When he finished Woodrow Wilson High School, his family moved to Everets, where their extended family, the Kirks, owned and ran a lumber operation. Brady worked in the sawmill but, by 1935, opened his own business — a radio and, later, TV repair service — in downtown Suffolk. While he served in the Army during World War II, his wife, Lib, kept the repair shop running.

He came home from the war still eager to own a piece of waterfront land and, in 1946, found his property — 105 acres of farmland, mud flats and marsh with that old farmhouse on Reid’s Ferry Creek. Brady’s daughter, Maribeth Zedd, remembers the future marina began as “a mud hole,” but Brady spent every Wednesday and Sunday building his dream. Working with a meager budget, Brady and a friend from the village of Holland, Lloyd Deir, sunk pilings and built decking and boat slips. By 1954, they had added a store for bait and snacks and a power crane to lift boats from trailers and into the water. In 1958, they added a boat ramp to launch boats from trailers. The boat ramp operated on the honor system.

The little marina’s popularity increased through the 1960s as interest in water-skiing added customers to the fishermen and crabbers who already kept the place busy. Brady’s son, Kirk Brady, said his father added covered rental slips and, later, a covered dry dock.

Their mother hated the marina, Zedd said, because Brady spent all his free time there, but the couple went fishing every Sunday after church. As children, Zedd and Kirk Brady enjoyed roaming the woods, swimming in the river and playing in the sand pits.

In 1958, a Norwegian oil tanker registered in Liberia, the African Queen, ran aground on Gull Shoal, about 30 miles south of Delaware Bay. It was an economic and environmental disaster for the ship that broke in half and dumped thousands of tons of South American crude — but a promising opportunity for Brady, Deir and two other friends. The ship owners had hired a professional salvage company, but after about six weeks of attempts, the salvagers gave up and the owners abandoned the ship in February 1959. Private scavengers descended on the wreck, stripping everything of value they could find and carry.

But Brady, Deir and friends set another course to profit, rescuing the stern section of the $6 million ship and selling it for scrap. Six horrifying and life-threatening months later, the men managed to bring what was left of the ship into Hampton Roads, where it sold at auction for a reported — and disappointing — $134,000. The rescuers had spent $112,000 on the venture.

Zedd and Brady Jr. still remember, however, that there was a parade in Norfolk at the docks to welcome the four adventurers home. One news story noted that three of the men were still grimy with oil and smudge, but Brady had showered, cleaned up and emerged looking fresh and lively.

Doug Whitehead, from Franklin and retired from the paper mill, also held a commercial crabbing license for 18 years and operated out of Brady’s Marina. “After Hurricane Floyd, Brady had to rebuild the docks,” he said.

“Isabel washed the boats out of the marina and up the hill into the farm fields. There used to be boats at every slip, the store was open and some people lived on their boats. We had a lot of get-togethers here — everyone was like family, only a phone call away.”

One of his marina friends is the grandfather of Brandon Faison, a younger commercial crabber from Suffolk, who had just pulled into the marina minutes earlier and unleaded his crabpots. The two men share concerns about the future sale of the marina and surrounding property.

”I’ve been crabbing commercially for four years but I’ve been down here since the day I was born — my grandfather was a fisherman here,” Faison said. “I hope it doesn’t sell, because I’d like to see the marina stay. Bennett’s Creek, our only other access to the river, is too far away. “

Zedd said their father would not have sold the property. Brady died, however, in 2011 at 96 and about five years ago, the 96-acre property went on the market. Brady had previously sold nine acres to fund his children’s education. The Zedds hope it will sell, but to a buyer who will maintain its character and hopefully keep the marina.

A strong lure for fishing

As a child, Alan Schubert would tag along with his father on fly fishing trips to Back Bay. His father,... read more