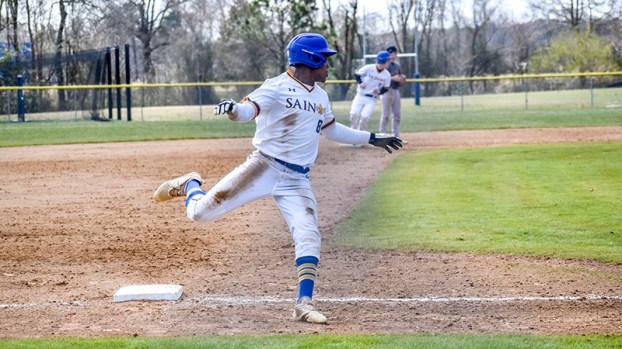 Jordan Crosland hits third base for the Saints. They split their first double-header of the season.

The Nansemond-Suffolk Academy baseball team split a pair of games over the weekend to start the season.

The Saints baseball team got its season started last Saturday at home when they took on St. Christopher’s School and Highland School in a double-header. The Saints fell to SCS in their first matchup 11-3 but was able to get a 7-4 win over Highland in their second matchup to go to 1-1 on the day.

In the win, the Saints were down 0-2 heading into the fourth inning before sparking four runs in the fourth alone. They’d go on to score three more runs between the fifth and sixth innings to get the win. Ty Howlett went 2-3 with two runs. Jordan Crosland added a double. Christian James and Jase Howell shared pitching duties with James pitching four of the seven innings and Howell closing. James was awarded the pitching win, as he struck out six.

On Monday, the Saints lost 4-2 to Atlantic Shores Christian School.

The Bulldogs were dominant in their 67-41 win over GW-Danville High School. The win firmly places them in the Class... read more