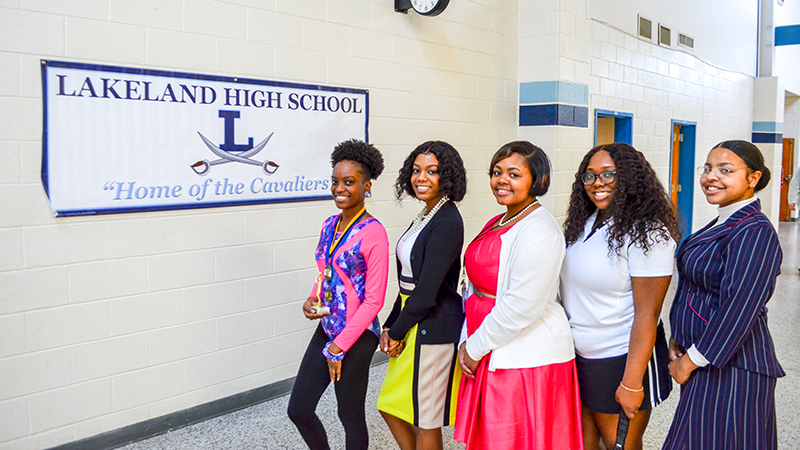 Five Lakeland High School students worked together with faculty and administrators to hold a spirit week at the school in February for Black History Month.

This Black History Spirit Week was held Feb. 24-28, with a different theme each school day that encouraged people to dress up and celebrate many different aspects of African American culture and history.

This project was a team effort by five female Lakeland High School seniors: Taylor Outlaw, Courtney Washington, Destiney Coles, Mya Carter and Cyerra Brimm. These young women are also part of the Project Lead the Way Biomedical Sciences Program at the school, according to Destiney.

In an emailed statement on March 5, Gordon stated how proud he was of these Lakeland students “for their creativity and promotion of organizing a black history week.”

“Destiney Coles reached out to me and shared their plan as she wanted to make this something that we did division wide,” Gordon wrote. “Several of our schools have similar programs and I just wanted to show my appreciation for their leadership and as a former history teacher, I love the fact that they are bringing history to life in the classroom and throughout the school day.”

The week of celebration started with Wakanda Day on Monday, Feb. 24. Students and faculty wore dashikis, tribal wear and apparel from the “Black Panther” film in a proud showing that kicked off the spirit week.

“It went pretty well. We had a lot of participation for (Wakanda Day),” Cyerra Brimm said in a Feb. 27 interview with the students.

That was followed by Soul Train Day on Feb. 25, with the theme inspired by the “Soul Train” television show that first aired in 1971, and those at Lakeland wore ’70s-era attire for the day. The next day, Feb. 26, was Excellence Day, and everyone was dressed for success in their best professional wear.

Feb. 27 was Historical Figures Day, with everyone representing a figure from African American history, as well as from modern African American culture. The spirit week concluded on Feb. 28 with HBCU Day, in which participants wore collegiate clothing that represented historically black colleges and universities.

For Historical Figures Day, the five young organizers once again led the way with their own costumes. Taylor dressed as Gabby Douglas, Courtney as Serena Williams, Destiney as Rosa Parks, Mya as Michelle Obama and Cyerra as Katherine Johnson.

Destiney chose Rosa Parks for her strength and her powerful role in the Civil Rights movement, while Taylor chose a modern-day idol that she related to as an athlete herself.

“I’ve always been a sports person. I do volleyball, soccer, field hockey and everything, and since she was a gymnast, it really spoke to me,” Taylor said about her choice to dress up as Gabby Douglas. “I felt that I wanted to represent her, and all the things that she did as a black woman.”

The young women were impressed by the amount of participation they saw from students and faculty during Black History Spirit Week. Destiney said that they’ve seen many others in their senior class get involved, and that there were underclassmen who were also eager to participate.

“We feel like what we’re putting into it, we’re getting it back, (and) we’re very appreciative of seeing people participate in it,” Destiney said. They were also very happy to see faculty members get into the spirit of the week, such as teachers Jennifer Ledbetter-Phillips and Ashanta Ruffin.

The students hope that Black History Spirit Week carries on after they graduate at the end of this school year. They want it to be an annual tradition at Lakeland and also an inspiration for other schools in the district and beyond.

“It was never meant to be just for black people to participate in. We wanted the whole school to come together and just represent a culture that we really believe in, and that we live in every day,” Taylor said.

“We see people participate in that (and) we really do feel very appreciative that they did,” she continued. “In the world nowadays, we’re trying to come together and appreciate one another, rather than separate everybody. So that was really nice to see people take part in something that we planned.”