Cavs use strong defense in semifinals 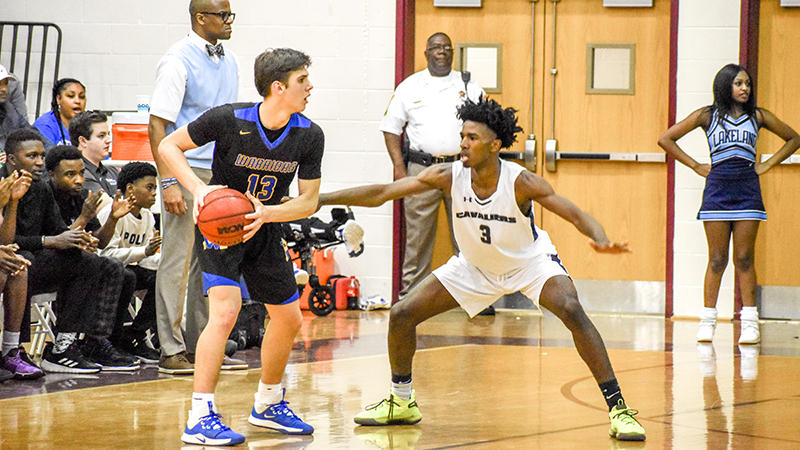 Raymond Bellamy defends the perimeter for the Lakeland High School Cavaliers in their state semifinals win on Tuesday night.

The Lakeland High School boys’ basketball team was able to grind out a win Tuesday night in the state semifinals over Western Albemarle High School.

The name of the game during the postseason is survive and advance, and that could mean a number of different things. Sometimes a team may not win with what got them there and, in turn, may need another aspect of the game to win. The Cavs understand that and have been using their defense to assure them a spot in the Class 3 state title game this Friday night at VCU.

In a 43-35 win Tuesday night, the Cavs used their stifling defense down the stretch to take the win. In the first quarter, the Cavs seemed to be trying to get in a rhythm despite a tough whistle. Keimari Artis picked up two early fouls for the Cavs, and some of the shots Lakeland had didn’t fall. After being down 10-13 after the first quarter, Lakeland went into the second quarter, hitting some key shots. Both teams were tied at 21 at the half.

In the second half, Lakeland limited Western Albemarle to 14 second-half points in a defensive performance Coach Clint Wright Sr. felt like was one of his team’s best.

“Collectively, that’s one of the better defensive games we have had,” Wright said. “I thought that effort on the defensive end really kept us going, and I definitely feel like that’s one of the best games we’ve had this year. We played instinctive basketball, and our intensity was where it needed to be.”

Lakeland hasn’t shot as well during their state tournament run as they did in the region tournament. However, they are getting the looks they want. Wright is encouraged by that and believes the Cavs will start getting some of those looks to fall.

“Anytime you are getting good looks instead of turnovers is a coach’s dream,” Wright said. “The fact that we were able to get the shots we want is encouraging, and it gives confidence going into the championship game on Friday.”

Clint Wright Jr. had it going throughout much of the game for Lakeland and finished with 16, while Raymond Bellamy finished with 14, doing much of his damage in the second half. Artis hit key free throws at the end of the game to seal the deal.

Now, Lakeland will shift its focus to Cave Spring High School for the Class 3 boys’ title this Friday night at VCU.

Despite loss, future is bright for Lady Cavs