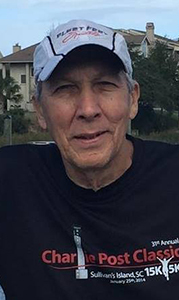 Hersey “Ed” Edward Brinkley, 79, of Charleston, S.C., entered into eternal rest on March 7, 2020, surrounded by his family. He fought a short battle with pancreatic cancer.

Born on April 10, 1940 in Nansemond County, Hersey was a son of the late Lee Brinkley and Gertrude Wright Brinkley.

He graduated from Whaleyville High School and served five years in the U.S. Army. He retired from Bon Secours Hospital System in Virginia as the credit and collections manager.

Ed was a member of the Tidewater Striders and the Charleston Running Club. He held several local, regional and national records in a variety of races ranging from 5K, 10K, half marathons, and marathons such as the U.S. Marine Corps Marathon and the Boston Marathon. He held the record for the fastest man over the age of 60 for the Cooper River Bridge Run in Charleston, S.C. He was a loving grandfather who supported his grandchildren in a variety of sports and always told them to bring the pain to the competition.

In lieu of flowers, tax-deductible memorial contributions in Ed’s memory may be sent to the American Cancer Society to fund lifesaving research, treatment and care.

Expressions of sympathy may be viewed or submitted online at www.mcalister-smith.com.