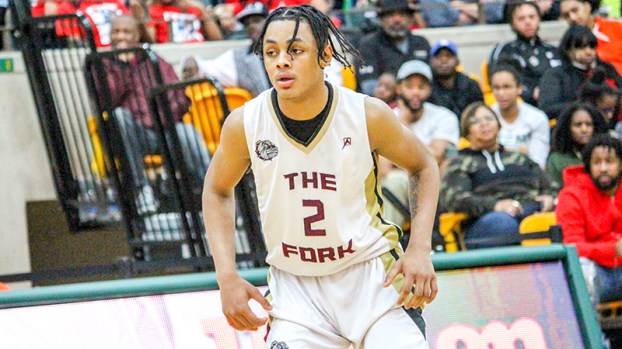 Sophomore Bulldog George Beale prepares to make a move during Tuesday night’s game against George Washington of Danville. King’s Fork High School pulled off a win to advance to the state title game on Friday.

The King’s Fork Bulldogs have had several players shine throughout their run to the reaching the state championship game. Leading the way has been sophomore point guard Jayden Epps, who earned Region 4A and Southeastern District Player of the Year honors in putting up more than 27 points per game.

In addition to Epps, the Bulldogs have seen Tyler Chatman showcase his outside touch as one of the best three-point shooters around, while front-court newcomers Quentin Livingston and Bravion Campbell have proven to be game-changers with their play around the basket.

Sometimes forgotten about, yet still very meaningful to their success is sophomore guard George Beale, who recorded a double-double with 16 points and 11 rebounds as King’s Fork started strong and cruised to a 67-41 win over George Washington of Danville in Tuesday night’s VHSL Class 4 State Tournament semifinals at Norfolk State’s Echols Hall.

“It feels good because this has been our No. 1 goal the whole year. This is what we’ve been working for,” said Beale, recovering from a back injury that plagued him in their quarterfinal escape four days prior against Monacan.

“I didn’t practice the last practice. I just went with the trainer, she gave me some treatment and I had to get ready for this game. I knew I had to come back strong since I didn’t play too well the last game. It can be anybody’s night in any game. So whoever’s night it is, the mindset remains to go out and get the job done.”

King’s Fork (24-3 overall) grabbed a 20-6 lead less than seven minutes into the contest. By halftime, their advantage was 12 at 34-22. Beale scored 12 points in the opening half on 60-percent shooting from the field to go with seven rebounds.

“G can do a lot of things for us on both ends of the court,” said King’s Fork Coach Rick Hite, pleased to see his team come out with the initial burst on the defending state champs.

“For them to come back after winning the state title and be in the Final Four says a lot about their character and coaching. We just wanted to jump on them, pressure them and make everything difficult.”

After giving up 62 points last Friday, King’s Fork responded defensively in holding the Eagles to 28.6-percent shooting (14-of-49). They out-rebounded them 51-30 on the evening, and the 41 points they allowed matched the second fewest surrendered by the Bulldogs all season.

“Attention to detail. That’s the phrase we use,” Hite said. “We weren’t pleased with how we defended against Monacan. We had a pretty harsh film session. We just wanted to get back to the basics of who we are. Make sure you are where you’re supposed to be. Don’t get caught up in the atmosphere or even the stage. Just do your job. Our guys were on it tonight.”

Facing GW’s 6-foot-8, 370-pound center Tyler McDuffie, a Hampton University football commit, Campbell more than held his own in the paint with nine points, six rebounds and a couple of blocks.

“He wanted that,” Hite said of Campbell. “I wasn’t worried. You’ll want to have Bravion on your team.”

Epps had another steady outing, finishing with 19 points on 7-of-14 shooting to go with six rebounds and assists.

“He doesn’t complain and just does his job. Jayden’s an unbelievable competitor,” Hite said.

What was Hite most pleased with in this latest playoff win for the Bulldogs?

“That we were able to come back and give a better effort,” he replied. “I didn’t think we competed, the energy was off, but the guys wanted to make up for that performance. I told him that good teams find a way to win against a really good Monacan team. Let’s come out and play our game.”

King’s Fork is one of eight Hampton Roads boys or girls basketball teams playing for a State Championship this weekend. The final step for them to take in trying to capture their first title since 2009 will come on Friday at 2:30 p.m. at VCU against Wilson, who they defeated 80-71 earlier this postseason for the Region 4A crown.

“I put on the board all the teams we played and beat. Some really good teams, some of them are still playing now,” Hite said. “Our guys have been battle-tested and we’ll get a chance to finish it off on Friday. It won’t be easy. We know it’ll be tough. But we’ll be there.”

Cavs use strong defense in semifinals

The Lakeland High School boys’ basketball team was able to grind out a win Tuesday night in the state semifinals... read more