Deputy and her family distribute food 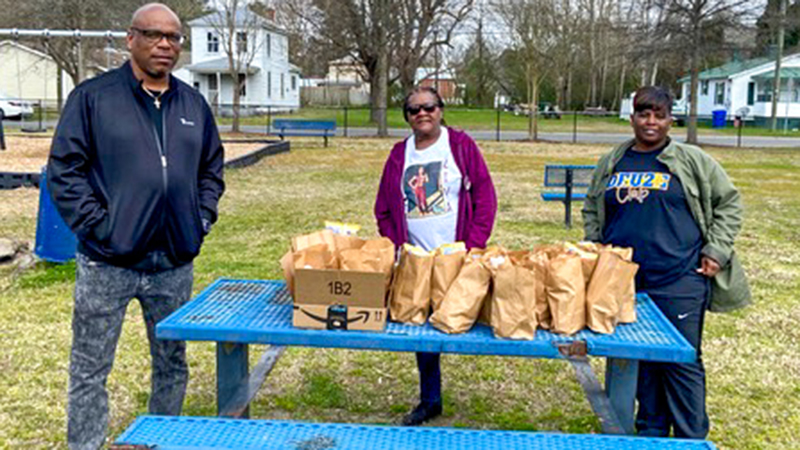 The distribution team on Monday included, from left, Michael Vaughan, Joyce Woodson and Shameka Council, as well as Verkiyah Hughes, not pictured.(submitted photo)

A local woman has taken it upon herself to make sure local children have food while they are out from school.

Veronica Woodson, who is a deputy with the Suffolk Sheriff’s Office, said she started working on the effort late Saturday night. By Monday at 11 a.m., she was handing out bagged lunches at a local park.

“I reached out to a couple of friends when they announced the kids were out of school for the next two weeks,” Woodson said in a phone interview Monday afternoon. Earlier Monday, Suffolk Public Schools had announced plans to assist in feeding children during the pandemic-related closure, but Woodson said she would continue with her plans also, in an effort to ensure every child can eat.

Woodson said she started contacting friends and “everyone just started pitching in,” she said. People donated packaged food and drinks to be bagged for distribution.

Woodson publicized the effort on Facebook, and on Monday, 21 children showed up at a park in Saratoga from 11 a.m. to noon to get lunches.

Woodson said her motivation came from our own experience as a child.

“I had to depend on school lunches,” she said. “I can imagine some of these kids today, that might be all they’re going to get, is what they eat at school.”

Woodson added this is a community effort.

“This is a community thing,” she said. “We’re trying to give back. Everyone is really pitching in and helping out with this event.”

She gave special recognition to those who had helped her or donated items, including Shameka Council, Joyce Woodson, Sarah Knight, Bill Brooks and Sheriff E.C. Harris.

Following is the schedule for this week and next week. All distributions are at 11 a.m. to noon. Woodson said people who want to volunteer or donate can call 375-5175 or come directly to one of the locations from 11 a.m. to noon.

Sponsoring the search for a cure