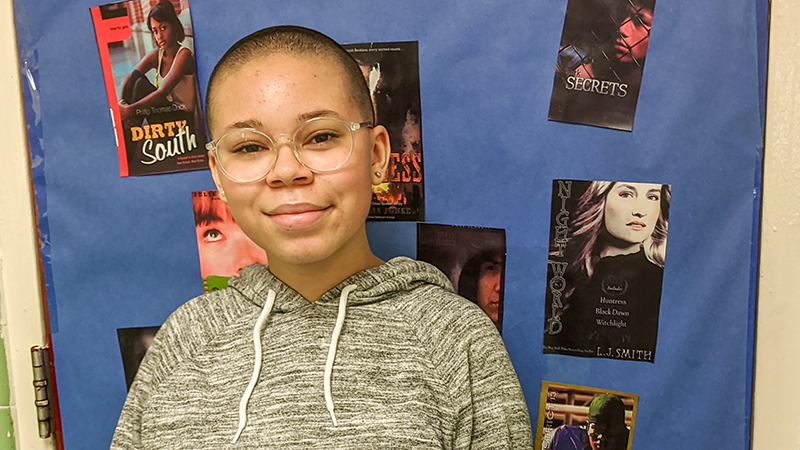 Cheyenne Brown, 13, an eighth-grade student at John Yeates Middle School, had her hair shaved off during a fundraiser at O’Connor’s Brewery Co. in Norfolk for the St. Baldrick’s Foundation, which provides hair to make wigs for childhood cancer patients.

Cheyenne Brown got a few looks when she came into school after having her hair shaved off.

But once her friends and classmates at John Yeates Middle School found out why she did it, they were all behind her.

An eighth-grader at the school, Cheyenne, 13, donated her hair to the St. Baldrick’s Foundation, which provides hair to make wigs for children’s cancer patients. She got it shaved during an event March 7 at O’Connor’s Brewing Co. in Norfolk.

Her father, William Brown Jr., had cautioned Cheyenne about cutting her hair.

That didn’t stop her, though. And she’s gotten a bevy of positive reactions on what she did and on her current appearance.

And although their hair wasn’t as long as Cheyenne’s, her father and brother, William Brown III, 17, also shaved their heads.

Though she likes to have short hair, others have said kind words to Cheyenne about her longer dark brown hair, which she grew out to more than seven inches before getting it cut.

Her principal, Dr. Wendy VanHosen, said what Cheyenne did displayed exceptional maturity, noting that for middle school students, it’s an awkward age when they’re trying to figure out many things and are exceptionally conscious of their appearance.

VanHosen said Cheyenne’s parents also deserve credit for what she did.

“It’s a commendation to her parents as well,” VanHosen said. “Just the fact that they have exposed her to these types of opportunities, and maybe even instilled in her a desire to serve others, that’s awesome.”

Cheyenne said she would recommend that others do what she did.

“Go for it, and don’t worry about what other people think, because a lot of people will think you look good anyway, truthfully,” Cheyenne said.

A budding artist whose favorite subjects in school are English and social studies, Cheyenne liked knowing her hair was going to help someone else and hopes to do it again once her hair grows out.

“It makes me feel good,” Cheyenne said, “like I’m doing a good thing in the world.”