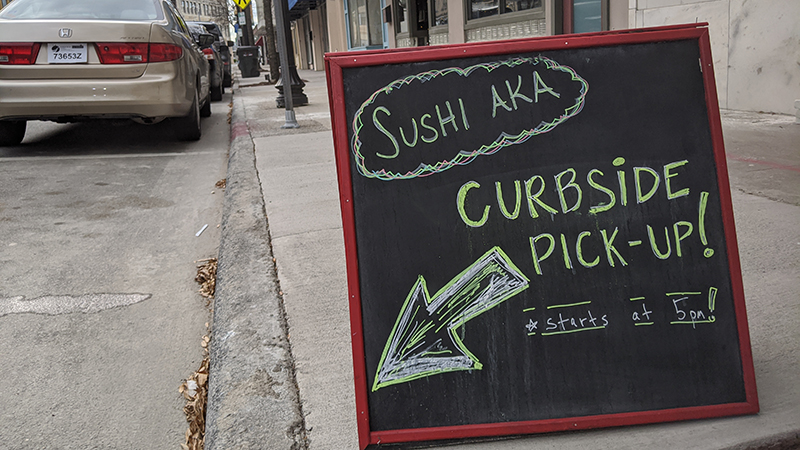 Sushi Aka is one of many local restaurants offering curbside delivery during the COVID-19 pandemic.

Like many city restaurant owners, Sushi Aka owner Michael Hart has had to make adjustments on a near-constant basis during the coronavirus pandemic.

Inside his downtown restaurant on West Washington Street, Hart and his staff were preparing Tuesday like they would any normal evening, except that there would be no dine-in service. They were preparing carry-out orders, and he is also branching out to offer curbside pickup and deliveries, which will include lunch deliveries to businesses.

Hart is also looking into staying open on Sunday and Monday, days Sushi Aka is normally closed.

“For me, it’s the unknown,” Hart said. “Doing my purchasing this weekend was a little weird. I had to go to the Restaurant Depot (in Virginia Beach), and for us, we normally do a strong carry-out business, but my entire cart was eight cases of to-go boxes and to-go cups for soy sauce, and cups for soup, things like that.”

“I hope that everyone will have the common sense to stay home … in the days ahead,” Northam said in a news release. “This order will ensure that state and local health officials have the tools they need to keep people safe.”

Other restaurants, such as Amici’s and Harper’s Table downtown, are offering curbside pickup, while River Stone ChopHouse, Vintage Tavern and Decoy’s Seafood in North Suffolk have closed their dining rooms for the next two weeks. River Stone will be doing take-out and curbside pickups, with most of its menu available, from 5 to 8 p.m. Monday through Saturday. Harper’s Table will, for now, not be open for dine-in service.

River Stone will also be offering free boxed meals of hamburgers, hot dogs and chips for curbside pickup at River Stone from noon to 5 p.m. this Friday and March 27 for the community and the restaurant’s staff, though supplies are limited and the items in the boxes are subject to change.

George’s Steak House, off of Holland Road, will still be open with limited dine-in seating, and has carryout services. It is also readying a curbside service. Derl’z Restaurant and Pub on East Pinner Street said on its Facebook page that it would not close unless it is mandatory.

At The Plaid Turnip, which has already moved its location temporarily to the Suffolk Center for Cultural Arts since owner Ed Beardsley is renovating its Main Street location, the unknown has also been challenging to navigate.

With officials stressing social distancing as part of society’s effort to help slow down the spread of COVID-19, the illness caused by the coronavirus, The Plaid Turnip’s business has been adversely affected.

“We’ve certainly seen a decrease in business,” Beardsley said. “But we’re trying to adapt, because I’m hoping that we can make it through without the employees suffering, or anybody else, or the business itself.”

According to the Virginia Department of Health, there have been 67 positive cases of COVID-19 as of Tuesday, up from 51 Monday, with 1,028 reported to have been tested. There are larger clusters of cases in northern Virginia and in the Williamsburg region. Four cases have been identified in Virginia Beach, though none have appeared in the Western Tidewater Health District, which includes the cities of Suffolk and Franklin, along with Isle of Wight and Southampton counties.

Across the U.S., the Centers for Disease Control and Prevention was reporting 4,226 positive COVID-19 cases and 75 deaths through noon Tuesday.

Like grocery stores, Hart is also seeing a disruption to his supply chain as a result of the pandemic, noting that he could see that issue soon with his seafood supply. However, Hart vows to stay open, even if it means he’s selling hamburgers.

“Literally we’re rolling out this to-go stuff, and the new menus,” Beardsley said. “I’ve never done that menu before. I don’t know if one person is going to order, no people, or 100 people. I have no idea. And in the same respect, I don’t know how to necessarily staff to support to help them on those particular things.

Among those new things, The Plaid Turnip is offering curbside pickup, with its full menu available, and will also offer full family meals for four or more people at $8 per person. Beardsley said he would continue to offer table service as long as it is allowed.

Both Sushi Aka and The Plaid Turnip also plan to do lunch deliveries. Most of Sushi Aka’s regular menu will be available, and it will still be able to offer its three-course Restaurant Week menu. Sushi Aka is also offering a three-day meal package at $85.

Hart said if by Thursday the state was still allowing people to dine-in at restaurants, he would consider doing about three seatings per evening and limit it to nine people in the restaurant.

Hart has been preparing for the changes to his restaurant. He has been in touch with his restaurant’s insurance company, reached out to the city to talk about taxes — especially with meals taxes due Friday — and has pared down some of the restaurant’s hourly staff.

Hart said other local businesses have offered hours to his employees to help, especially if he has to limit hours due to declining business. He also accepted an offer from a long-time customer to buy gift cards to Sushi Aka at 10 percent off. That order turned into $1,000 of gift cards for $900. He said that 10-percent-off gift card offer stands for anyone else, too, and he’s hoping delivery customers will tip generously to help out his staff.

Beardsley said that with payroll due Wednesday, it’s going to be tough for him now, and tough for all restaurants going forward, but he vows to forge ahead.

“Literally every day has gotten harder to do business as usual,” Beardsley said. “And now all of the restaurant owners are just trying to adapt, because there’s still bills to pay.”