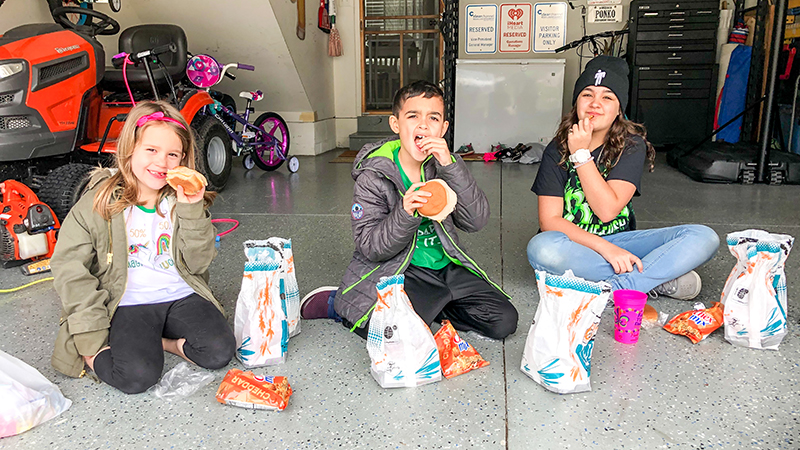 From left, Sydney, Gregory and Addy Ponko eat their breakfast and lunch that they and their father, Jeffrey Ponko, picked up Tuesday at King’s Fork High School. (submitted photo)

Jeffrey Ponko and his three school-age children picked up their breakfast and lunch at King’s Fork High School Tuesday, the first day of Suffolk Public Schools’ food delivery program for students while schools are closed due to the coronavirus pandemic.

His three children had apple bites and orange juice for breakfast and a ham and cheese sandwich, Chex mix and an apple for lunch.

“The cafeteria worker was extremely friendly and told us to make sure we keep coming back,” Ponko said.

While students and their parents could come to King’s Fork to pick up their meals, 11 buses also fanned out throughout the city Tuesday morning to deliver food to students in their neighborhoods.

The deliveries to students across the city will continue weekdays through at least March 27 and beyond, should schools continue to stay closed, according to Superintendent Dr. John B. Gordon III.

“We’re going to do this definitely through the 27th, and if for any reason we have to extend this closure, we’re going to do it as long as our kids are out of school,” Gordon said.

He and Dr. Lawrence Whiting, director of food and nutrition for the school division, said the first day of deliveries went smoothly.

“For the first day, and as quickly as we had to put this thing together, it couldn’t have gone any better,” Whiting said.

A couple of people who missed their stops were directed to get food at King’s Fork, and on a couple of routes, buses ran out of food, but Whiting said they were able to redirect other buses with more food to those areas. It also had a bus at King’s Fork on standby to bring food if more was needed.

“It just took a lot of coordination between the cafeterias, the managers, and basically a lot of work putting the food together,” Whiting said. “Transportation was also very helpful in this just because they did the actual stops where we were trying to make sure all the kids that were in economically deprived areas (had) a service in their area that they could get to.”

The 25 cafeteria staff members on hand prepared about 1,650 meals Tuesday. He expects the number of meals distributed to double Wednesday. Gordon said the division has the capability to serve meals to every student in the division but is focusing on those who qualify for free and reduced-price lunch.

Gordon said the planning for the food delivery came together over the course of the past week, but the division was still putting the final touches in place late Monday as it was finalizing the bus routes, the food preparation and other logistics, including getting waivers from the state and federal departments of education to allow food delivery.

Initially, the school division had canceled its food order when schools were told to close. However, Whiting put them back in Sunday to get those going again as the food distribution plan took shape.

“We had to make sure we had enough food, and have the right kind of food,” Whiting said.

The division also could not deliver milk to students because it did not have anything to keep its temperature below 40 degrees, and the bread it ordered will not arrive until Thursday, though Whiting said it has enough bread on hand to prepare the meals until then. They were also able to use food they already had on hand at other schools and bring it to King’s Fork.

Students will be getting different things for breakfast and lunch each day. For breakfast, students will get some combination of PopTarts, graham crackers, honey buns, doughnuts or muffins served with fruit juice and fresh fruit.

“We had to order a lot of that stuff, because we didn’t necessarily have enough on hand to do that stuff,” Whiting said.

For lunch, they’ll receive different kinds of sandwiches — bologna, turkey, turkey and ham, salami with cheese, along with baked chips, a fresh fruit or a vegetable such as carrots, celery sticks and broccoli, along with juice.

Meal prep took about three hours Tuesday before the buses rolled out around 9 a.m., and the entire process of preparing and distributing the food took six to seven hours, Whiting said, though he expects that to speed up as they are able to prepare some aspects ahead of time. Cafeteria workers were already preparing for Wednesday, and the division was planning to pick up fresh fruit for those meals.

Each of the buses had a cafeteria worker on them to not only pass out food, but also to ensure compliance with food handling and distribution guidelines. Division administrative staff were on some of the buses to help with getting the food out to students.

It was still a bit of guess work to know how many students would take advantage of the program.

“It was sort of a guess as to how many we thought were going to be out there, because we just did not have a clue,” Whiting said.

Other staff members stayed at King’s Fork, the central hub for food operations for the duration of the deliveries.

“This is really just the entire city coming together to make sure that folks are taken care of during this uncharted territory,” Gordon said.