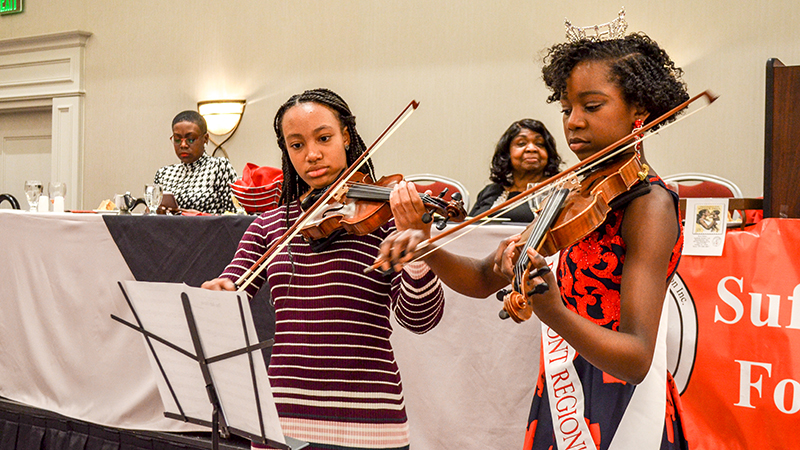 “Can you imagine having a chisel and hammer pounding your joints, causing the worst pain imaginable?”

That’s the question Ayana Johnson, ambassador and youth advisor for Suffolk Sickle Cell Foundation Inc., asked the attendees gathered for the annual charity awards banquet on March 7. “What about actually experiencing that pain and being taken to the emergency room, only to be treated like you were being dramatic or seeking attention? No? I can.”

The 45th annual charity awards banquet for Suffolk Sickle Cell Foundation Inc. had a supportive and engaged turnout at the Hilton Garden Inn Suffolk Riverfront on East Constance Road. More than 175 tickets were sold for this year’s event, which raised between roughly $7,500 to $10,000 as of March 13, according to Dr. Felton Whitfield, pastor of New Jerusalem Church of God in Christ, and president of the board of directors for the Suffolk Sickle Cell Foundation Inc.

Ayana was born with sickle cell disease, an inherited blood disorder that’s also known as sickle cell anemia. The disease affects an estimated 70,000 to 100,000 people living in the United States, the majority of whom are African Americans, according to the event program.

Symptoms and complications of the disease vary widely. Some have mild symptoms, while others have very severe symptoms and are hospitalized frequently for treatment.

While normal red blood cells pass smoothly through the blood vessels, sickled cells are stiff and sticky, and tend to form clumps that can block blood flow and lead to episodes of extreme pain known as “crises,” as well as chronic damage to vital organs.

People with sickle cell have lifelong anemia because their red blood cells survive only about one-tenth as long as cells with normal hemoglobin.

“It is cruel, invisible and unpredictable, having an uncanny ability to keep its victims silent, while concealing the damage on the human body and mind,” Ayana said in her remarks. “The main stigma is that the pain is not as intense as described. The only treatment option for severe pain crises are high-dose narcotics, which leads to anxiety and emergency room visits.”

Suffolk Sickle Cell Foundation Inc. was founded in 1975 to bring more awareness to the plight of sickle cell patients, and to provide much-needed services and resources to those with sickle cell.

According to the program, these services have included providing clients with emergency food, utility and rental assistance, as well as scholarships, back-to-school supplies, warm coats and blankets, and emergency co-pays for prescriptions and medical visits.

“As the Sickle Cell Board of Directors we want you to know how thankful we are for your support for the past 45 years,” the program states, “and we look forward to your support even more as you look through your spiritual eyes as we do, and see this as a ministry, meeting the needs of the people.”

Remarks were shared by Suffolk Mayor Linda T. Johnson, Suffolk Public Schools Superintendent Dr. John B. Gordon III, and School Board member Karen Jenkins, who was there on behalf of her husband, Delegate Clinton Jenkins. There were also testimonials shared by three different individuals, as part of “the Voices of Sickle Cell” segment.

Ayana Johnson was one of those who gave their testimonies at the banquet. She’s the daughter of Leonard and Hermionne Johnson, and is an honor student at Col. Fred Cherry Middle School. She’s also Miss America Outstanding Teen Piedmont Region 2020, and was named Miss Suffolk, National American Miss Pre-Teen 2018 at the National American Miss Pageant that year.

Ayana is determined to advocate for those who do not have a voice. She helped raise more than $1,000 toward relief efforts for those in the Bahamas that were devastated by Hurricane Dorian last year, and she advocates for the National Marrow Donor Program’s “Be The Match” Registry, in addition to her sickle cell advocacy.

She said at the banquet that she wants to raise awareness and promote encouragement, education and empowerment. She is also a competitive dancer and a talented violinist, and played the violin and performed a riveting dance during the banquet.

“I refuse to be defined by sickle cell disease,” she said. “I am a warrior living my best life.”