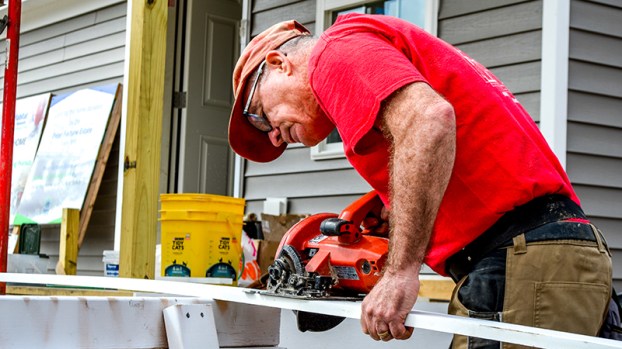 Helping families in need, despite pandemic

“Red Hat” volunteers with Habitat for Humanity of South Hampton Roads worked safely and diligently on Wednesday to build a family home in Suffolk amid the COVID-19 pandemic.

The groundbreaking ceremony for the 1,300-square-foot, three-bedroom, two-bathroom home at 219 Pitchkettle Road took place in October. The house will be for the Jordan family and is located on land that was donated by the Peter Fortune estate. The project was sponsored by Birdsong Peanuts.

According to Habitat for Humanity of South Hampton Roads Executive Director Frank Hruska, the goal is to close on the house in mid-April. Construction has slowed down due to COVID-19 concerns, but Habitat for Humanity is still working to address the need for affordable housing, while also mitigating the risk for volunteers.

“Although there is a virus going on that’s on the top of everyone’s minds, the need for affordable housing is still critical,” Hruska said. “Fifty percent of low-income families pay over 50 percent of their income on housing, which impacts them, so the need does not go away. Habitat for Humanity is committed to keep building, as long as it’s safe for our volunteers to come out and build houses.”

Changes have been made to keep Habitat for Humanity volunteers safe as they work on the Suffolk job site, in accordance to guidance by state and federal governments and the Centers for Disease Control and Prevention.

According to Hruska, only up to 10 “Red Hats” are being permitted to work on the job site. Red Hats are volunteers who have extensive experience with Habitat for Humanity and who can be relied upon to do the necessary work without supervision.

Hruska said many of the Red Hats on Wednesday have been volunteering for an average of about four years. They’re also mostly retirees, meaning they’re less likely to spread the virus socially or in a workplace.

The Red Hats conduct self-assessments to decide for themselves whether or not they are comfortable with volunteering, and are given hand wipes and hand sanitizer. Furthermore, only two Red Hats are permitted to work on the same task simultaneously and must stay at least three feet apart from each other.

Stephen Leaman, one of the Red Hats on Wednesday, said they were making good progress. Leaman has been a Red Hat for Habitat for Humanity of South Hampton Roads for 12 years and has volunteered with the organization nationwide for 35 years, helping to build more than 200 homes over that span of time, he said.

This home is immensely important to the Jordan family, and while the volunteers need to stay safe during this pandemic, this family still needs this home, as well.

“There’s a family waiting for this house, and they’re scheduled to come in — if things go the way they should — in April,” he said. “We would like not to have to delay them entering the home. For them it means a home they’ve never had before, and they save money when they get into a Habitat program, so it helps solve the problems that we are facing today.”

The mission of Habitat for Humanity of South Hampton Roads is to build affordable homes that strengthen families and communities, according to shrhabitat.org. These homes are then sold at no profit to partner families, with a 30-year, fixed-rate mortgage that’s no greater than 30 percent of their income at closing.

These mortgage payments are contributed back into their building program, which helps create more homeownership opportunities for deserving families.

“The houses are actually bought by the homeowners, based on their income and what they can afford, so at the end of the day it’s all about affordable housing,” Hruska said.

“It’s a community between the families and the donors and the cities, and the volunteers that come out and help build houses,” Hruska said.

People interested in volunteering with Habitat for Humanity of South Hampton Roads can find more information online at shrhabitat.org.