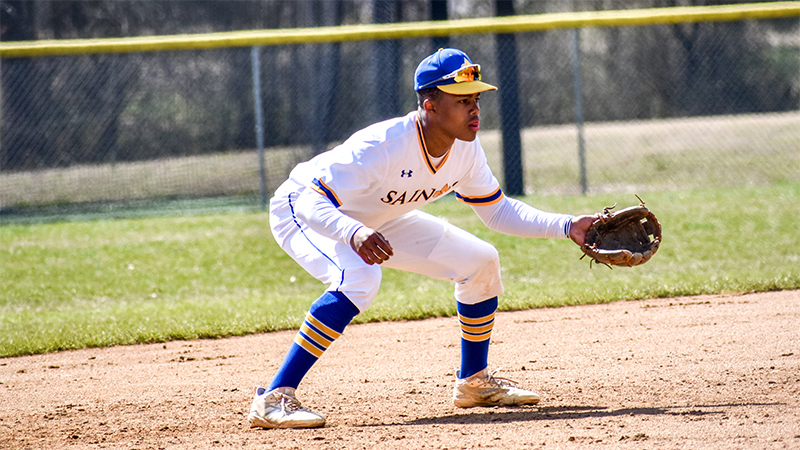 Jordan Crosland was voted Suffolk News-Herald Player of the Week after going 3-3 with three RBIs and two doubles in a win for the Saints.

Jordan Crosland was voted Suffolk News-Herald Player of the Week after going 3-3 with three RBIs and two doubles in a win over Southampton High School.

With the spring season currently postponed indefinitely, luckily, the Nansemond-Suffolk Academy baseball team were able to get a few games in before everything stopped. Within the first five games of the season, Crosland was able to have some strong performances, which included his game against Southampton. During that game, Crosland went 3-3 with a run, three RBIs and a double. It was a strong game for the NSA freshman, who felt good about his performance.

“I felt good,” Crosland said. “I was prepared and confident. I had a chance to bounce back from one of my previous games, which wasn’t one of my best.”

The NSA freshman came into the season prepared. He knew he was going to see better competition and that he had a chance to improve on his season from last year. The season could resume, or it could end, which is disappointing, but Crosland felt good about the work he put in this summer that helped him get ready for this season.

“I felt prepared and excited for this upcoming season,” he said. “I knew I was going to face challenges that were going to make me better. I’m a little disappointed with the season either postponed or canceled, but by the same token, I’m optimistic if we don’t continue to play out the spring that we’ll be able to get some good summer work in.”

Just getting the opportunity to play the game of baseball is a motivation for Crosland. He cherishes being able to enjoy the game and not take anything for granted when he steps on the field. As he came into this season, Crosland wanted to focus on being a good teammate and to develop some solid leadership qualities. Over the summer, he competed in the Hank Aaron Invitational in Florida, where he was able to compete with 250 other players. Crosland performed well, which also helped him get prepared for a standout season this year.

His inspiration comes from his family and his coaches, who are always pushing him to be the best he can be. As Crosland continues to look for ways to get better, he hopes the season can continue so he can keep getting on the field and helping his teammates.