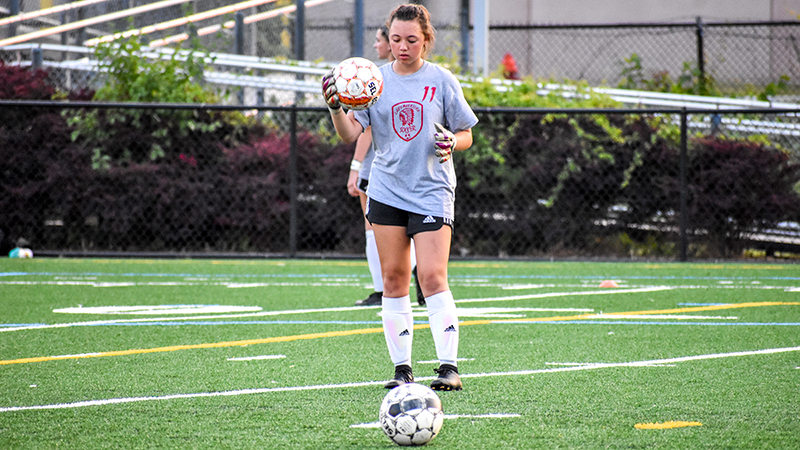 Maddie Friel returns as the goalkeeper for the Lady Warriors this season.

The Nansemond River High School girls’ soccer team returns a strong group of players this season in the midst of a suspended season.

The Lady Warriors soccer team was looking forward to hitting the ground running prior to the delay occasioned by the COVID-19 pandemic. Last season, the Lady Warriors had a strong season in which they finished as the region runner-up. They advanced to the state tournament, falling in the quarterfinals; however, overall it was an impressive season by the team.

Even though they graduated a ton of top contributors last season, they also returned some as well. Sydney Corey, Riley Goss, Alex Jackson and Payten Swerda all return this season. Goss, unfortunately, suffered a season-ending injury in one of the team’s scrimmages this season. She was an All-State selection last year as well as All-Region. Swerda, Jackson and Mitchell were All-Region selections from last season. All five of the girls were honorable mentions in the district.

“We had a tough loss in Riley for us, but overall I feel like we have a lot more depth than last season, which will help us through the year,” Swerda said. “We are very young again this season, with only one senior, but the six returning starters will help, and I think the girls will do very well this season.”

Swerda believes the team’s defense will be its strength this season. However, with the loss of Goss, the offense will have to be more creative, but that is something the Lady Warriors will be prepared for. It will be a good chance for some younger players to step up.

Before the postponement for the start of the season was announced, Nansemond River had already competed in a couple of scrimmages they felt good about. Once the season starts, the Lady Warriors will have to make do with their time, just like everyone else throughout the state.

They will likely jump straight into district play, where they finished 6-3 last season. The region will be even tougher this season, with teams moving down from Class 6A, but the Lady Warriors believe they still match up well with those teams. If the season is to still happen this year, the Lady Warriors will have a lot of potential.