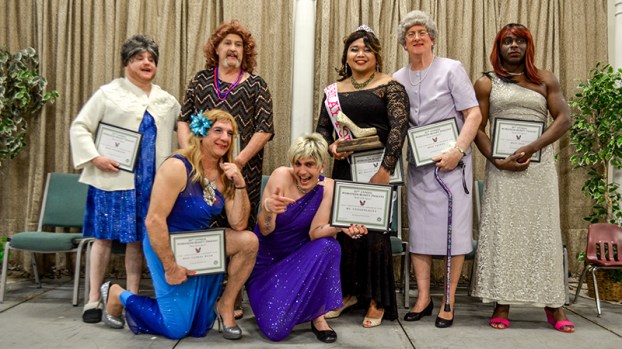 The Nansemond River Pilot Club crowned Ms. Relay for Life 2020 during the raucously fun Womanless Beauty Pageant, which was held in front of hundreds on March 7 in the Liberty Outreach Center, 116 Romans Road.

The theme for the 20th annual Womanless Beauty Pageant was “Battle of the Queens,” with seven returning champions and a few runners-up from previous years competing in front of a packed house for a good cause.

Contestants modeled their favorite ladies’ casual clothing, showed their skills in the talent portion, and then got into their best eveningwear before answering questions on femininity, goals and romance. There was music and dancing and plenty of surprises — such as an impromptu “Sister Act” performance organized by master of ceremonies Ray Bennett, with hilarious nun outfits.

The ultimate victor was Jay Lagman, known by his pageant persona “Jay La,” with makeup and a black dress.

Lagman was crowned Ms. Relay for Life 2020 and also received the “People’s Choice” award, which was decided by the amount of donations each contestant received from the audience for their personal money buckets. Lagman had more than $300 in donations for his money bucket.

“It’s good that we came out,” Lagman said about this year’s pageant and his fellow contestants. “We raised a lot of money and it’s going to a good cause.”

Dillon Hollowell won the “Miss Congeniality” award for his exuberant and bubbly personality as “Tilly Mae.” Hollowell’s excitement left a positive impression with the audience that won him the award.

The “Most Original” award was given to Steven Lindblad, also known as “Fanny Farkle,” another over-the-top character with an outrageous wig, a patterned dress and a soft spot for MC Bennett. Joe Natoli and his pageant persona “Barbielicious Chang” won “Best Casual Wear” with an interesting outfit that had colors akin to gold, plus golden earrings, hair, boots and a butterfly on top of his head.

The “Best Interview” award went to Brooks Hedgepeth, or as he was known on the stage, “Sherry Cherry.” During the interview segment of the pageant, Bennett asked Hedgepeth who his biggest role model was, and he answered with several: his father, mother and grandfather.

“I’m a family man. I respect everybody and treat them the way I want to be treated,” he said.

Warren Johnson took home the “Best Talent” award by playing his guitar and singing Loretta Lynn’s “You Ain’t Woman Enough (To Take My Man),” while wearing a cowboy hat and in character as the elderly but lively “Ima Vailable.”

Last but certainly not least, Ty Satchell won for “Best Legs” as “Tyra Rox.” He used his winning legs to full effect during his extended workout dance routine — both and off the stage — for the talent segment.

It was a night of colorful costumes and bombastic behavior, but the purpose of the evening came full circle during the lighting of the luminarias. Attendees purchased luminaria bags that were lit during the ceremony, each one representing someone that has been lost to cancer.

There was also a long list of names, all of whom were loved ones who have been lost to the disease, cast in a solemn series on the venue wall by a projector, accompanied by a singer and a bagpiper.

According to Nansemond River Pilot Club President Becky Adams, 425 tickets were sold for this year’s pageant, and more than $11,000 was raised for the fight against cancer. That includes the 50/50 raffle, silent auction, luminaria purchases, money bucket donations and the support of approximately two dozen sponsors.

“Overall, I think it was our best year that we’ve had yet,” Adams said in a Thursday phone interview. “It was fun for the past contestants to come back. They had a blast coming back and competing again. We raised a lot of money for a great cause, and we hope to continue it in the years to come.”

ADA provides guidance for COVID-19 The 2020 Hampton Roads Tour de Cure has been postponed due to the COVID-19 pandemic,... read more