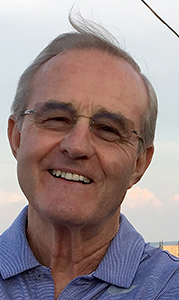 As the sun rose on March 20, 2020, Danny Smith Glover left this world peacefully at home surrounded by his family. Born June 3, 1946, in Suffolk, Danny was the loving son of Odom Smith Glover and Myrtle Powell Glover. He was a 1964 graduate of Holland High School, where he was a star on the football and baseball fields as well as the basketball court. A highlight of his talent was playing in the annual Pine Bowl, an event that also featured his high school sweetheart and loving wife of 52 years, Sally Sue Smith Glover. Leading the way for Danny as he was growing up and throughout his life was his inseparable older brother, Charles D. Butch Glover. Danny was also blessed to have two sisters, Velna Griffin and Jeane Brown.

After high school, Danny embarked on the next chapter of his life, which included a combination of hard work and education. He worked his way through Old Dominion University and graduated in 1973, earning a bachelor’s degree in business. His time at Old Dominion is remembered by car pool rides with good friends, making dean’s list and filling the entire first floor of the KA house with sand for a beach party. Also while a student, Danny enlisted and served his country in the National Guard. During his time in the National Guard, he was a qualified sharpshooter and met lifelong friends.

Leaving Suffolk, he and Sally relocated to Richmond, where Danny continued his education and began working in the trucking industry. Their time in Richmond resulted in a Master of Business Administration from University of Richmond as well as two adoring children, Lisa Carol Glover and Charles Ryan Glover. When their time in Richmond came to a close, the family moved back to Suffolk. In 1977, with a single truck and a few trailers, Danny and his brother Butch started two family trucking businesses, GTL Transport Co. and Glover Trailer Leasing. Their dedication and approach of putting others before themselves created the foundation that has allowed both businesses to continue to thrive in the family name. In his 43 years in the industry, Danny was respected for his work ethic, honesty and commitment to the trucking community. He served on numerous boards and committees through different organizations, including Port of Virginia, Tidewater Motor Truck Association and Virginia Maritime Association.

Danny had many interests and passions. Most notable was his association with International Scouts. He was a founding member and Virginia director of Southern Scouts, an organization created in 1996 dedicated to the preservation of International Harvester vehicles. Among many best-in-show awards and trophies, his crowning achievement was receiving the Ted Ornas award in 2011 for his 1964 Scout 80 model. That award, named after the original designer of the Scout, was presented to Danny by the granddaughter of Ted Ornas at the Scout Nationals competition in Springfield, Ohio. His 1964 Scout restoration is also featured in the International Scout encyclopedia. He was proud of his many awards; however, his greatest joy was fixing Scouts for other family members to own. His love of classics was not limited to Scouts; he had an affection for any good-looking car with a strong motor. He liked being on the water. He helped his father build a boat, and he once waterskied the entire span of the Nansemond River from the James River Bridge to Constant’s Wharf in downtown Suffolk. He also enjoyed exploring uncharted roads on his Harley-Davidson, restful weekends in the Outer Banks and discovering the next best place to eat. He was a loyal supporter of his alma mater Old Dominion Monarchs and since high school held the utmost respect for his Duke Blue Devils basketball team.

As he moved into the last phase of his life, his greatest pride was undoubtedly his four grandchildren, Henry and Ruby (Charles and Kim), Sarah and Grace (Lisa and Stephen Keith). He was a faithful fixture in the stands at their baseball games, sitting sideline at their basketball games and front and center at their dance performances. He also met two very special individuals during his final days, Jae and Tracey.

All who knew him were better for it. Danny had an infectious smile and a great laugh coupled with a sharp sense of humor. He was the main attraction in any room, could fix anything and gave the best advice. His was truly a life well-lived.

Services will be private. R.W. Baker & Co. Funeral Home and Crematory is serving the family. In lieu of flowers, please consider making a donation to the Johns Hopkins Interstitial Lung Disease Clinic to support the development of new treatments for pulmonary fibrosis. Condolences may be registered at RWBakerFH.com.

T.E. Cooke-Overton Funeral Home,  Inc. regrets to announce the death of Paulette B. Sollers. Funeral arrangements will be announced at... read more