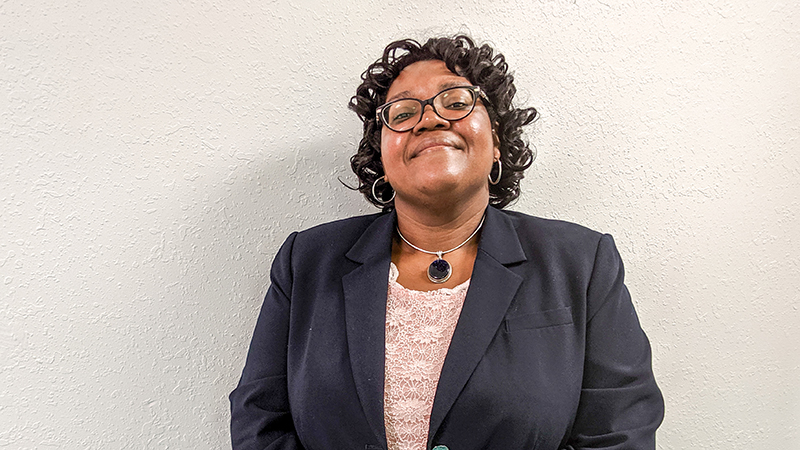 With the Coalition Against Poverty in Suffolk's Night Stay program ending early due to the coronavirus pandemic, its director, Mignon Burton and her staff are working to find housing and food for the city's homeless.

An early end to the Coalition Against Poverty in Suffolk’s Night Stay program with the onset of the coronavirus pandemic has posed problems for the city’s homeless population, and those trying to help them.

The program will close its doors for the season Wednesday morning, three weeks early. Night Stay Director Cheryl Griffin said the people coming into the program were already struggling to save enough money to find housing before it ended ahead of schedule.

But with the end of Night Stay, and with fast food and other restaurants shutting down their dining rooms as Gov. Ralph Northam has ordered, she said the city’s homeless population will have nowhere to go during the day, and are struggling to find temporary shelter and food.

“It’s causing a lot of problems for our guests,” Griffin said. “A lot of them are working and they were planning, saving for that mid-April target date and this cut them short. They were planning to go into housing and have enough money saved up, and this messed them up on that end.”

Other churches have shut down their food pantries in the wake of the pandemic, and with some churches reluctant to host the Night Stay program through its last few weeks, it has caused myriad issues for the city’s homeless population and those trying to help them.

Some organizations, such as the Foodbank of Southeastern Virginia and the Eastern Shore, have set up drive-through food pickups, but Griffin noted they are difficult to access for those without transportation. Many are also concerned, she said, about the possibility of a mandatory curfew and being arrested for having nowhere to go.

“It’s hard, because some of them — we’ve got elderly people in here, we’ve got disabled — they just have absolutely nowhere to go,” Griffin said. “It’s going to be very hard on them because there’s nowhere for them to go during the day now, and no food. We’ve been really working, trying to figure out what we’re going to do.”

Griffin said many churches and residents have made donations to CAPS to try to help by providing food cards and offering to pay for temporary lodging in hotels. Others have offered to pay for partial deposits to get people into housing, but because those using the Night Stay program thought they were going to have extra time, she said, few had made arrangements with landlords to secure housing.

But with many churches having to shut their doors and businesses having to scale back hours or close entirely, it only exacerbates the need.

“Right now, I’m seeing some real fear with some of our guests because they have no clue of what to do,” Griffin said, “and they’re afraid they’re going to get in trouble just for being homeless.”

Some have jobs, and some are trying to arrange jobs. And CAPS is trying to help even as it tries to do its work differently.

“I’m just having them call in and just explaining what the basis of their needs are,” said CAPS director Mignon Burton. “And I just return calls in the order of, right now, whether or not there are some imminent risks.”

CAPS works with churches and organizations in the city to help alleviate poverty, address homelessness and connect people in need to helpful resources while fostering community development. Burton is pleased that there has been a pause on evictions, but she worries about what will happen when the pandemic passes and that pause is lifted.

“Due to the fact that there’s a stay on evictions and foreclosures put in place … until April, it’s sort of mitigated the fact of people being evicted during this unprecedented time,” Burton said. “But … this is what I foresee happening. As soon as that process is over, it’s going to spike.”

Mignon said her office has fielded about 150 calls per month and scheduled 45 to 50 appointments per month, with night stays averaging between 13 to 35 people per night. Griffin said there are about 13 people in the shelter now, with that number increasing as people are getting laid off.

Before the pandemic, Burton said about half of the people contacting CAPS were simply walking in the door seeking its services, not those coming in for an appointment. Currently, walk-ins have been suspended for two weeks.

Burton said it’s harder to make a personal connection with people — no handshakes, hugs or any other contact. They are still making and seeing appointments, however.

“You can just try to talk a person through,” Burton said. “But some people need to see a face. And so I think for those, that could be a little bit more difficult.”

People in need of services through CAPS can still call or email, and Burton vows they will still be helped.

“If they call our phone number and leave a message, we’re very responsive, trying to just evaluate where things are and ensuring those that are going through any type of critical situation, we are triaging it,” Burton said, “taking the most critical situations and putting them at the top.”

With the CAPS volunteers and interns, Burton said the staff is making sure they are safe.

Throughout the Night Stay season, CAPS has been working to find housing for those coming in, which Burton said has helped.

“It’s about … ensuring that the ones that we have remaining that have some critical needs, finding alternative places for them,” Burton said. “That’s pretty much been our focus.”

The shelters have been operating under guidelines from the Centers for Disease Control and Prevention while ensuring the safety of guests and volunteers, operating with minimal staff to follow state and CDC guidelines.

And even though CAPS has been following those guidelines, and they have discouraged high risk populations — such as the elderly or those in poor health — from using the Night Stay program, some churches have been reluctant to house it in its final five weeks. Two churches continued with the program, while another backed out and one other expressed reluctance, Griffin said, so they opted to end the season early, especially with the difficulty in securing volunteers.

Of the 13 using the shelter now, about 10 have not been able to secure housing. Some of those are working full-time, but if they use all of their money for a boarding house or hotel, they won’t be able to get into permanent housing, Griffin said. And if they don’t, they will not have any place to go for a few weeks until they do secure their housing.

The current situation has made CAPS’ job more difficult, but Burton asks the public to bear with them as they help the most vulnerable populations in the city.

“It is challenging, but the thing of it all is having a very informed and responsive board,” Burton said. “It has been a great weight-lifter. The staff has been very proactive at learning and adapting and being able to just take (things) as they come.”

CAPS is also looking for donations of sanitizing wipes, large and individual quantities of hand sanitizer, and face masks. It still needs more donations of $10 meal card donations to places such as McDonald’s, Wendy’s, Hardee’s, Subway and Chick-fil-A.

Griffin said CAPS will need support from outside its core group of supporters to continue its mission.