Checking out the virtual library 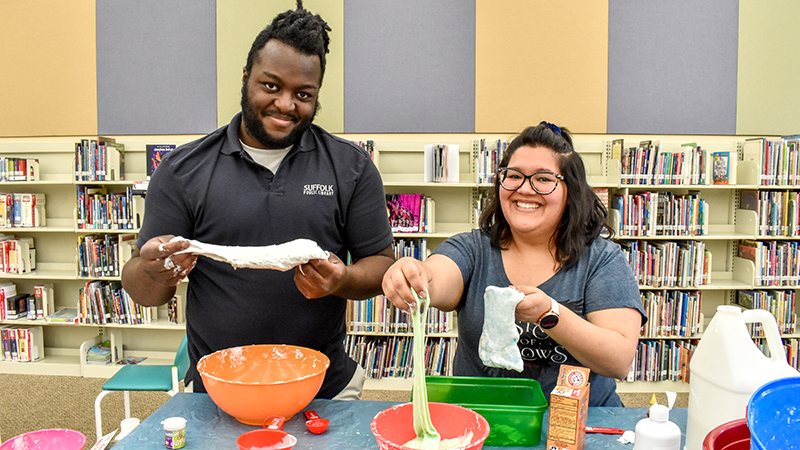 Library Youth Services Coordinators Cory Bland and Mary DuBose demonstrate one of many activities provided in the virtual library. The Suffolk Public Library has been bringing virtual storytime and classes to its patrons since the library closed to the public following the coronavirus pandemic. (submitted photo)

The Suffolk Public Library had already been posting storytime videos to its social media pages, but with Gov. Ralph Northam ordering schools closed for the rest of the school year, it has ramped up its online offerings.

“A lot of our ideas that we’ve had for virtual programming have come from existing classes and events that we’ve offered that work well in an online environment,” said Angie Sumner, marketing and community relations coordinator for the Suffolk Public Library.

The library has been posting daily videos, including Storytime Rhymes and More with Mrs. April, Behind the Book and do-it-yourself classes on its Facebook and YouTube pages. The library has already filmed content such as DIY Slime, How to Make Your Own Sensory Bottles and Fandom Crafts, using everyday items at home.

April Watkins, the early childhood services senior librarian, said the goal is not only to entertain and engage children; they want to model ways for parents to engage in early literacy strategies at home.

“This is always my goal for storytime,” Watkins said in a news release. “My hope is that all kids will have participated in early literacy activities before entering kindergarten, because that will make them much better readers in the long run.”

Sumner said many already follow the library’s storytime readers, and they have been appreciative of the expanded online offerings.

“It brings a sense of normalcy to their lives to continue that routine,” Sumner said. “For kids, that’s important, I think.”

Though the library has been closed to the public, staff members are still available by phone from 9 a.m. to 5 p.m. Monday through Friday, and online on its website through its Ask Us form. It will answer questions, sign people up for a library card if necessary and direct people to online resources while the physical library is closed.

People can call and sign up for library cards over the phone to allow them instant access to digital materials such as e-books, audio books and more. Those with a library card can use Hoopla, which allows people to check out up to six items per month, including e-books and audiobooks, as well as TV shows, music, movies and comics.

Besides Hoopla, those with a library card through the Suffolk Public Library can use RBdigital, which allows access to audiobooks and electronic magazines. The library also offers access to a language learning program and online learning resources for both children and adults.

Those who have items checked out will have those automatically renewed the day after they are due, Sumner said, and that will continue every three weeks until the item is returned. Any item that has been checked out can be returned to any of the library’s three locations — downtown, in North Suffolk and in Chuckatuck.

The library also has a print from anywhere service that is offered for no-contact pickup at either the Morgan Memorial Library or the North Suffolk Library.

Sumner said the library is making use of a makeshift studio to record its programming, and it has been reaching new audiences with its expanded online programming.

“We’re still here as a resource,” Sumner said. “It’s just taking that and bringing it to where the community is currently, and most of them are at home, and fortunately, we already have a lot of stuff already available here online. … A lot of what we are doing, we have the framework to get that out to people.”

To reach out to the Suffolk Public Library, call 514-7323 from 9 a.m. to 5 p.m. Monday through Friday, or use the Ask Us form on its website at www.suffolkpubliclibrary.com/askus.