Next steps for Amazon as it builds up 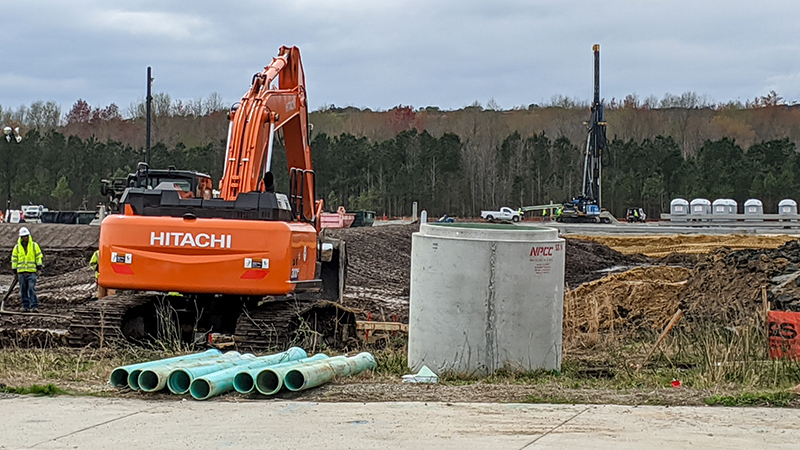 The Conlan Company is continuing with site preparation work on Amazon’s $230 million robotics fulfillment center in the city’s Northgate Commerce Park as it prepares the footings and foundations.

Now that Amazon has broken ground on a new $230 million robotics fulfillment center in Northgate Commerce Park in North Suffolk, work continues behind the scenes to move the project along.

The facility will be 822,833 square feet and, at 95 feet and four-and-a-half stories tall, will have an overall square footage of more than 3.8 million when it opens sometime in 2021. It will complement a 650,000 square foot processing center being built about two miles away in Chesapeake.

The facility will host about 1,000 full time employees as they work alongside robotics and other technologies to pick, pack and ship smaller-sized customer orders — things like books, toys, electronics and home goods.

“It’s great to do the press release, but there’s so much work to do after that,” said Suffolk Economic Development Director Kevin Hughes in a recent interview.

While the work at Northgate has continued unabated — construction is exempted from businesses required to close during the coronavirus pandemic in Virginia — Hughes said the unseen work that is happening as the 18-month project continues carries significance, also.

“Really, what’s happening behind the scenes that folks aren’t really aware of is the interaction with the permitting staff,” Hughes said. “A building like this is fairly unprecedented. It really begins to push to the interaction that you have with those that submit documents and the professional staff here, and obviously, we’ve been working behind the scenes on how to scale up for something like this.”

Hughes said a lot of things are still fluid with the project.

“Amazon’s a dynamic company,” Hughes said. “They know what they’re doing today, but it could be different tomorrow, and so there’s literally phone calls and interactions that are happening continually.”

From erosion sediment control to footings and foundations and building permits, Hughes said those things will begin to be worked through.

“What you’ll physically see is cut and fill,” Hughes said. “So, they’re doing site prep, getting the foundation ready. … And then the big one will be as steel arrives, and so you literally begin to see how things get stacked up in the construction coming in, and you’ll see that toward the end of spring.”

That’s when the public will begin to see what 95 feet looks like on a massive scale, though it was getting public attention even before the formal announcement earlier this month.

“We encourage everyone to be really safe and drive slow out there,” Hughes said. “I think the site’s going to be a tourist attraction for a while during construction.”

Hughes said that with work to bring this project to fruition already having taken a few years, the Economic Development office has been in touch with city businesses.

“To be frank, since we’ve been working on this project for a number of years now and interacting with our companies in the city of Suffolk, knowing that unemployment is so low and working with the school system to create talent pipelines, doing the job fair, bringing our partners,” Hughes said, “we’ve really been trying to tighten the ship to make sure that our existing companies are able to find their employees and fill their needs as well.”

He said it will be important to ensure that both Amazon, and other city businesses, have a rich talent pipeline from which to draw. He said the city has experience with new job creation and is working closely with different constituencies to ensure everyone will be able to fulfill their needs.

“(We) want to make sure that we, the city of Suffolk, are able to provide good people for the existing companies,” Hughes said, “as well as Amazon when they come in. … That’s why we try to work really closely with these partners and continue to sharpen what we do and how we do it, so everybody can find the right people, or the best that they can.

“But also, they need to begin to think a little bit differently. That’s what we think about — how can we support them as they begin to attract people as well.”