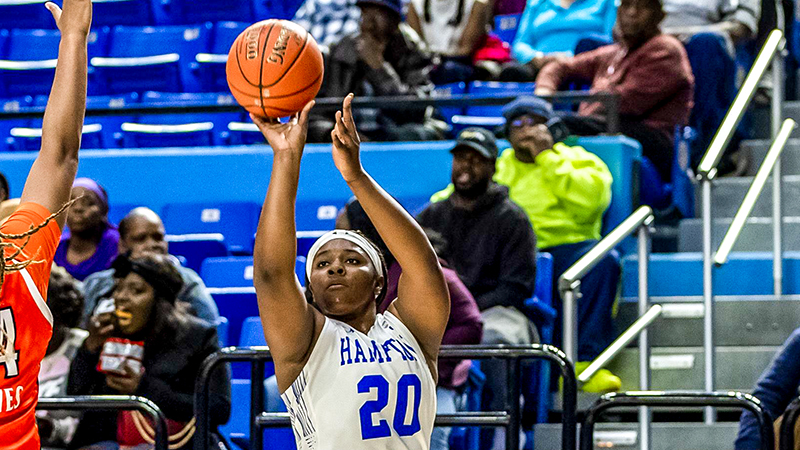 Young earned All-Conference honors by being selected to the All-Freshman team. It’s a strong honor for Young, who had earned three Big South Freshman of the Week honors throughout the season.

“I’m very humbled by the honor,” Young said. “I worked hard all 10 months for this.”

Young has averaged 12.7 points and 7.1 rebounds per contest as a freshman. She had six 20-plus-point games and recorded 10 double-doubles on the season, with a season high of 30 points against Longwood. She landed 11th in scoring with 13.1 points per game and seventh in rebounds in the Big South Conference.

Young made a big leap towards the end of the season and started finding herself being a focal point of other teams’ defense.

“I felt like my first season was great,” Young said. “I really didn’t think I was going to be a player that was on everyone’s scouting report before we played other teams. I was, and I am very proud of being able to exceed everyone’s expectations.”

Hampton’s season ended abruptly, as did many other college programs over the past month, due to the COVID-19 outbreak. Because of that, there was no Big South women’s basketball conference tournament, where Hampton could have made a case for an NCAA tournament bid.

“I’m going into the summer with a positive mind and a mindset that it’s a new season, and I need to do more than I did this year,” Young said. “I want to work hard and have fun while doing it.”

During the offseason, Young is looking forward to improving her defense. Also, she wants to increase her shooting percentage for next season and look to be a better player overall. If her freshman season is any indication, she could be in line for more All-Conference honors as a sophomore.