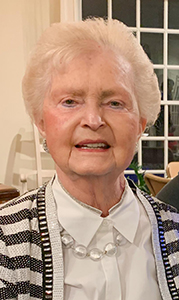 “Mama Sue,” as she was affectionately called by her family and friends, passed away peacefully on March 25, 2020, at age 80, surrounded by family and under loving hospice care at Westminster-Canterbury in Virginia Beach.

Sue was born on April 22, 1939 in Suffolk, the daughter of Major Thomas Benton and Lillian Smither Benton. She graduated from Suffolk High School in 1957, attended Longwood College and received a business certificate from Smithdeal Massey Business College in Richmond. Sue used those skills to work for then-Gov. Mills E. Godwin Jr. in Suffolk and Richmond in the 1960s and ’70s. Sue also worked for several years in the Suffolk office of Birdsong Peanuts.

Sue married the love of her life, George Y. Birdsong, at Main Street United Methodist Church in Suffolk on June 10, 1961. She had met George when they were in the second grade together and has often commented that she knew right away that George would be her lifetime sweetheart! She and George raised their three children — Anne Cabell, David and Charles — in Suffolk. All the children attended Nansemond-Suffolk Academy. Sue was very active at NSA, serving on the Board of Trustees from 1979 to1988. In 1996, she founded the Saints Society to encourage legacy gifts to benefit NSA. In addition, she was active in supporting school activities such as “Field Day,” auctions, art shows, and cheering on her three kids at all their NSA team sporting events.

She had a special relationship with Westminster-Canterbury (WC), her retirement community. Her mother, Lillian, lived at WC for many years, and Sue was so pleased to live at WC also. She joined the WC Foundation Board in 1998 and served for 20 years. Two projects dear to her heart were the opening of the Birdsong Health Clinic and the creation of the Birdsong Tablet. The Birdsong Health Clinic was an in-house medical clinic for WC residents that reduced the need to leave campus for doctor visits. The Birdsong Tablet became an award-winning computer tablet that empowers older adults to independently and easily navigate computer technology with content that stimulates their minds and entertains them. Today, Birdsong Tablets can be found in retirement communities and homes of individuals in 24 states.

Above all else, her family was most important to her. Sue’s home was filled with her laughter, kindness and love. Her love also extended to her neighbors and her children’s friends, most of whom called her “Mama Sue.” Her home and yard provided a playground for football, kickball, basketball and other fun activities for the neighborhood and numerous children. During summers in Virginia Beach, her house, yard and beach, continued to be places where all friends would gather. The beach was one of Sue’s favorite places. She especially loved watching the kids surf, boogie board, skimboard, play kadima paddle ball and other games, and of course, feeding them her special peanut butter and jelly sandwiches for lunch.

She and her husband, George, shared a beautiful 59-year marriage and partnership. Although Sue’s main focus was her children and George, she and George together participated in and supported many civic endeavors.

Sue enjoyed her life at WC and referred to it as home. In her three-and-a-half years living at WC, she made friends with many residents and staff. The family thanks the employees and all of the many caregivers of WC at Home and the WC Stone Rehab Center of the Hoy for their kindness, gentleness and love they showed Mama Sue every day.

A graveside service in Suffolk’s Cedar Hill Cemetery will be private for the family. In light of the coronavirus pandemic, a memorial service and reception to celebrate Sue’s life will take place on a later date at Main Street United Methodist Church in Suffolk. There will also be a memorial service at Holy Trinity Chapel at Westminster-Canterbury followed by a reception in their Anderson Bayview Room at a future date. In lieu of flowers, donations can be made to Nansemond-Suffolk Academy, 3373 Pruden Blvd., Suffolk, VA 23434 for the Sue Birdsong Endowed Scholarship Fund for students in financial need, or to the Westminster-Canterbury Foundation, 3100 Shore Drive, Virginia Beach, VA 23451 for residents, employees and community charities that need financial assistance, or to a charity of your choice. R.W. Baker & Co. Funeral Home and Crematory in Suffolk will be handling the arrangements. Online condolences may be expressed at rwbakerfh.com.