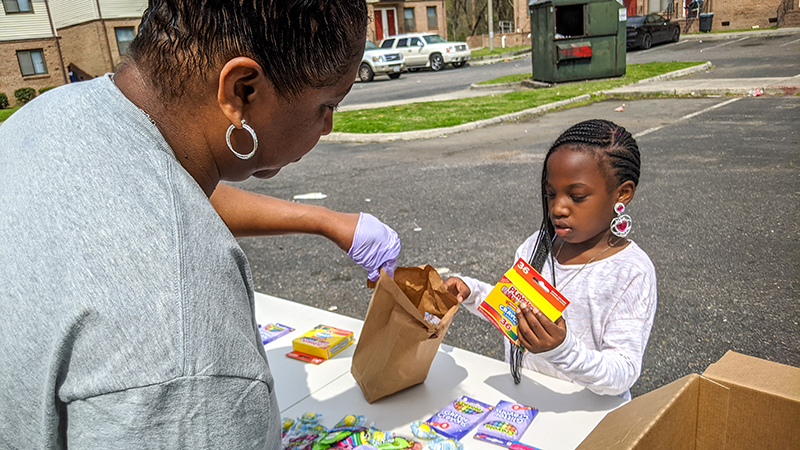 The coronavirus pandemic may have taken away the chance for Lakeland High School’s boys’ basketball team to win the state championship outright, but it hasn’t taken away their spirit to get together for something bigger than themselves.

On Friday, members of Lakeland’s co-state championship team went to Hoffler Apartments downtown to feed children who live in the community, handing out bagged lunches near the basketball court and playground. They prepared ham and turkey sandwiches, Gatorade, Easter baskets and other treats for the children.

“We just want to be a blessing for the community,” said Lakeland assistant coach Tony Smith. “The guys came up with the idea and brought it to the coaches. We were like, ‘It’s a great idea. Let’s go out here and make it happen. And so we’re out here just trying to be a blessing.”

For the players, they simply wanted to give back to those in need.

“We just (knew) that people weren’t going to be able to go out and get food and drinks, stuff like that, so we just decided to come out here and do it for people that can’t,” said Lakeland junior Calvin Williams.

Smith said it was an awkward moment after the state semifinal game when they were not allowed to shake hands with their opponents, as the Virginia High School League imposed restrictions during the early onset of the coronavirus outbreak in Virginia. Later that week, the state tournament was abruptly cut short, leaving Lakeland unable to play in the state championship game.

While out at Hoffler Park, players wore gloves as a precaution while handing out the food to the children, many of whom took advantage of the warm weather to sit outside and eat their lunches.

Smith said it was a big personal loss for the team not to be able to play in the Class 3 championship game against Cave Spring, but he said they would rather share a state championship than not have it at all.

Lakeland senior Devonte Saunders said it was an awkward way to close out what had been a special season.

“It was a great season,” Saunders said. “We just didn’t get to finish it, which really hurt because since 10th grade, we were saying that once we put all of our parts together, once we get everything together, get to the state championship at VCU, we’re just going to finish. It got taken away from us, just like that.”

As players handed out the remaining lunches before leaving, they said it felt good to get together again, and they enjoyed being able to help feed the children at Hoffler Apartments. They’re already planning to return soon to feed them again and they’re looking at trying to set up a safe way for the children to do an Easter egg hunt.

“We just wanted to give back to the kids,” Saunders said, “and lend a helping hand for those who need it.”