Businessmen team up for giveaway 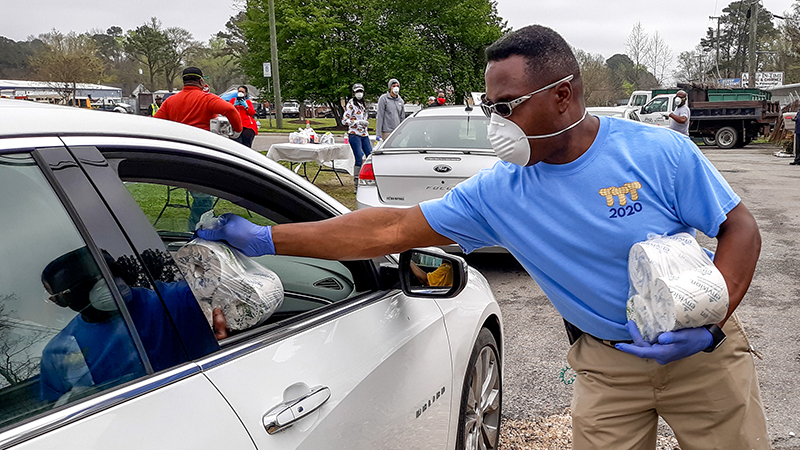 Tyrone Burks of Triple T Sports Center hands a bundle of toilet paper to a patron at a giveaway event staged by several local business owners on Saturday morning.

Local businessman LeOtis Williams, who owns a lawn service and investment company with headquarters on Old East Pinner Street, said he started buying bleach last summer, and wasn’t quite sure why.

“It was the strangest thing,” he said. “I bought this bleach last summer. For some reason, I was just buying bleach.”

As Williams stocked up on bleach for some unknown reason, across the street, Tyrone Burks at Triple T Sports Center was flush with toilet paper.

“A few months ago, I was looking for the big paper towel rolls that we use, and along with it came cases of toilet paper,” he said.

In a conversation with his wife that now almost seems quaint, Burks told her you can never have too much toilet paper.

“My wife was like, ‘What are we going to do with all this toilet paper?’” Burks said. “This was months ago.”

In the midst of the COVID-19 pandemic, Williams and Burks have realized that perhaps there was a reason they bought all that bleach and toilet paper.

The two, plus businessmen Mike Duman of Mike Duman Auto Superstore and Boo McGee of Amici’s Pizza Café, partnered on Saturday to give away the bleach and toilet paper, plus canned goods and ready-to-eat meals from Amici’s.

“It’s been great,” Williams said. The first person in line showed up at 7 a.m. for the 10 a.m. start. They had given away everything in drive-through fashion by 10:45.

“I just wish we could have done more,” Williams said, adding that 91 cars got something, although some of the items ran out prior to that. “There’s so many people suffering, so many people out of work, we just wanted to do something. We want to continue to be a blessing.”

Duman said the event had been well-received.

“Everybody’s been very appreciative,” he said, adding that the Suffolk Sheriff’s Office also sent a deputy for traffic control.

McGee said after word of the giveaway got out, other businessmen who want to remain anonymous donated to the cause and asked him to feed people, so he’s planning to deliver food to front-line workers this week.

“We’re trying to spread a little love,” he said.