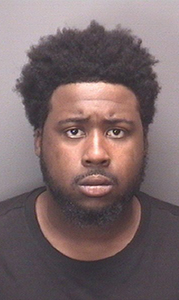 A Suffolk man has been charged with a raft of felonies in an early-morning incident on Saturday.

The incident started with reports of shots fired in neighborhoods near downtown and ended in a crash on a highway in Isle of Wight County, according to a city press release.

An officer was in the area of Wilson and Wellons streets after hearing shots fired in the area about 7 a.m., a city press release stated. The officer saw a white pick-up truck with U-Haul marking, which matched the description of a vehicle seen leaving the scene of a shots fired call near East Washington and Maple streets minutes earlier.

“The driver of the vehicle accelerated after he saw the officer, driving in a reckless manner at a high rate of speed before briefly stopping in the area of West Washington Street and Brewer Avenue,” the press release stated. At that location, an unidentified passenger, described as a black male wearing a do-rag and dark clothing, jumped out and fled on foot.

“Officer activated their emergency equipment and followed the vehicle, which continued to operate at reckless speeds traveling westbound on Holland Road/Route 58,” the press release stated. The vehicle ran off the road at the intersection of Camp Family Highway and Carver Road in Isle of Wight County. The driver exited the vehicle and surrendered to police.

The vehicle was found to have been stolen from Portsmouth, the release stated.

John Reshared Elliott-Wiggins, 23, was arrested on charges including receiving stolen property or goods more than $500; two counts of possession of a weapon by convicted felon; accessory before the fact in a felony; disregard police command to stop; and multiple driving offenses.

He is being held without bond in Western Tidewater Regional Jail.

There were no injuries in the incidents, city spokeswoman Diana Klink stated.

The investigation remains ongoing, and additional charges may be filed. Anyone with information about the incidents, or that can identify the subject that jumped from the truck, is asked to contact Crime Line at 1-888-LOCK-U-UP. Tipsters can also submit tips by going to www.p3tips.com or by visiting the Suffolk Police Department website at www.suffolkva.us/spd and looking for the Suffolk Crime Line link. Tipsters never have to give their names or appear in court and may be eligible for a reward of up to $1,000.

With schools closed for the rest of the academic year, Suffolk Public Schools Superintendent Dr. John B. Gordon III has... read more