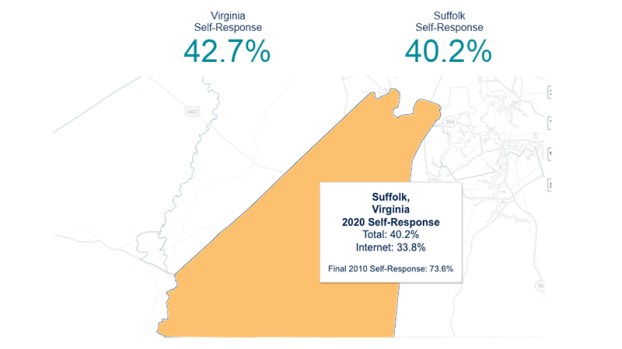 4 in 10 residents have responded to census

Officials are reminding Virginians that in addition to staying at home except for essentials, there’s another thing they can do at home during this pandemic that will help their community — respond to the 2020 Census.

“Getting an accurate count of everyone living in Virginia will ensure we get full federal funding for a variety of programs,” Gov. Ralph Northam said during a press conference on Wednesday. “That will be even more important as we work to recover from this pandemic.”

The census takes place every 10 years, and an accurate count is crucial for federal funding, assignment of congressional seats, public safety planning, funding for federal programs like Medicaid and school meals, and more.

April 1 is the official Census Day, but there’s still time to respond to the census. All Suffolk residents should have received mailed invitations in March with instructions to go online or call a toll-free number, 1-844-330-2020. The deadline to respond is July 31.

Mayor Linda T. Johnson said she had already filled hers out.

“It’s so easy, and it’s one of the few things we can do from home,” she said. “I certainly encourage all the citizens (to fill it out). It really does mean a lot to our city, as to things we’re eligible for and things we can get.”

So far this year, 40.2 percent of Suffolk residents have self-responded, according to statistics on 2020census.gov. That’s under the statewide self-response rate of 42.7 percent, but higher than the national rate of 38.4.

In response to the COVID-19 pandemic, several things have changed regarding how the count will be conducted.

One question on the minds of many parents of college students is whether they should now count their children at home, since they are home from school. However, according to the Census Bureau, most college students will still be counted at their schools.

The census is also delaying the start of its early non-response follow-up from April 9 to April 23, barring any further changes.

Jobless claims filed by Suffolk residents took a sharp rise in the last week as the effects of the coronavirus... read more