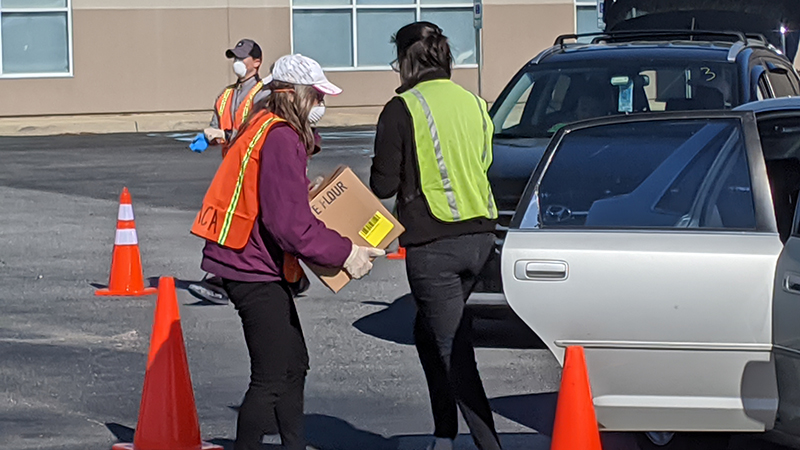 The Foodbank of Southeastern Virginia and the Eastern Shore distributed food Friday at the Suffolk Family YMCA off of Godwin Boulevard. The Foodbank has partnered with YMCAs in Suffolk, Franklin, Norfolk and Chesapeake to distribute food to people in need. The Suffolk Christian Fellowship Center has also been distributing food at its downtown location. Both have seen an increased number of people in the wake of the coronavirus pandemic.

The cars were waiting for the food boxes more than an hour before food distribution began at 9 a.m. Friday, but the lines moved quickly — enough so that the 350 boxes the Foodbank of Southeastern Virginia and the Eastern Shore had for people at the Suffolk YMCA on Godwin Boulevard ran out in 90 minutes.

The Foodbank has partnered with the YMCA to distribute food twice per week to people in Suffolk, Franklin, Norfolk and Chesapeake, having served 4,519 households overall through four distributions as of Tuesday, including 909 in Suffolk — not counting the 350 boxes distributed Friday.

Foodbank President and Chief Executive Officer Dr. Ruth Jones Nichols said that while it has seen a significant, increased need across its service area, it has seen an acute need at its pickup sites in Suffolk and in Franklin, which has served 1,383 households through Tuesday.

“It speaks to the tremendous needs,” Jones Nichols said.

“It has incrementally increased every single time,” Burgus said.

At Suffolk Christian Fellowship Center on East Washington Street, it is also seeing an increased need, and like the Foodbank, has had to adapt its services to meet the needs of the community in the wake of the coronavirus pandemic.

For starters, at the downtown location, it cannot do a drive-up service for people, and it can only allow two people at a time inside.

But Lorna Slaughter, who runs its food pantry and soup kitchen, said that is not an obstacle but rather a challenge it is up to as it adjusts to the way it serves the community.

“We’ve been on the front lines of this well before disaster ever struck,” Slaughter said. “Suffolk Christian has been an integral part of giving food to those who are in need for almost 20 years now.

“So, when this came about, we knew it wasn’t time to high-tail and run. We knew it was time to adjust, shift the way we operate so that we could continue doing what we already do and have been doing for so long. But we could do it so that everyone involved, both those that are participating in it, and those that are volunteering their time and energy, everyone can remain safe.”

A big challenge for both the Foodbank and for Suffolk Christian Fellowship has been getting enough food to give to the community. Jones Nichols said it is spending more on food — $3.50 per meal as opposed to 40 cents previously — because it is getting fewer donations.

Slaughter has that same challenge.

Because Suffolk Christian Fellowship has been primarily dependent on grocery stores to get its daily food supply, “we’re having to find new ways to acquire food so we can still have those goods to bless the people with.”

“The challenge is finding enough of that food to support our normal amount of people that are coming in the door,” Slaughter said.

Both organizations have received assistance from the Obici Healthcare Foundation, and the Foodbank has also been partnering with Mercy Chefs and Senior Services of Southeastern Virginia.

Suffolk Christian, along with its partnership with the Foodbank, is also working with Operation Blessing out of Virginia Beach to provide pallets of dry goods. It has received food from Bethlehem Christian Church, as well as donations of gloves, masks and money from people throughout the community. Slaughter said other churches that have had to close their food pantries during the pandemic have been donating their food to Suffolk Christian Fellowship.

She has seen an increase of people coming in the door since mid-February, and it has come from people of all backgrounds. Normally, Slaughter said she serves about 60 households per day, but that has increased by 14 percent, or 44 new people who had never been in the doors of Suffolk Christian Fellowship.

Jones Nichols said the Foodbank anticipated having to do something different in March in order to serve the community, and set itself up to mobilize operations for a three-week period that ended Friday. It will continue with its current food distribution schedule at the four locations in Suffolk, Franklin, Norfolk and Chesapeake while it readies a modified plan that will carry it through June. She said the COVID-19 outbreak has helped the Foodbank refine its focus.

“We will have to adapt some of our initiatives,” Jones Nichols said. “We’re fortunate that our supporters understand the need to do it.”

But for those newly in need, Slaughter said there is no shame, and she and Suffolk Christian Fellowship are there to help, and in turn, she said for those who cannot give anything else, to give prayer as it continues to serve the community.

“This is a challenging time for all of us,” Slaughter said. “We want you to come in the door because you have the need, and we want you to walk out of the door with the same amount and level of dignity and respect that you come into the door with.

Suffolk Christian Fellowship Center is accepting monetary donations. Those wanting to donate can send checks to P.O. Box 1842, Suffolk, VA 23439. It is open on Monday, Tuesday, Thursday and Friday from 11:30 a.m. to 12:30 p.m., and on Sunday from 2 to 3 p.m. at its location at 211 E. Washington St. Just two people are allowed inside at a time.

Anyone wanting to donate to the Foodbank of Southeastern Virginia and the Eastern Shore can go to its website at foodbankonline.org and click on the “Donate Now” link. The Foodbank is distributing food at the following four YMCA locations on Tuesdays from 5:30 to 7:30 p.m. and Fridays from 9 to 11 a.m.

School Board to meet in person