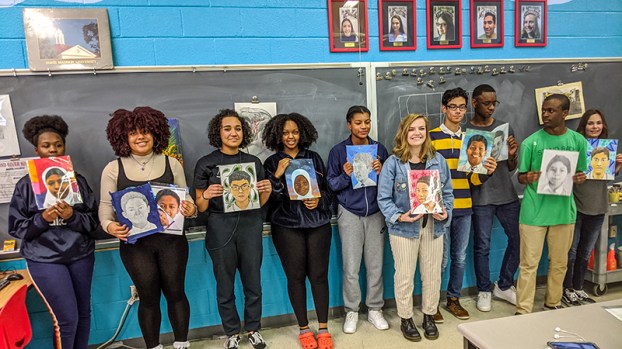 Students in Brian Kershasky’s Art 4 class at Nansemond River High School created portraits of children in Malaysia as part of The Memory Project, a group that promotes intercultural awareness, friendship and kindness around the world using art as a universal language to communicate. The children from Malaysia received their portraits a few weeks ago, and The Memory Project forwarded a video of it to Kershasky to document it.

The smiles on their faces said it all for Nansemond River High School art teacher Brian Kershasky.

Earlier this year, 11 of his Art 4 students drew portraits of Malaysian children, using a photograph sent to them by The Memory Project, a group that promotes intercultural awareness, friendship and kindness around the world using art as a universal language to communicate.

They spent more than a month working on them, and about a month before Gov. Ralph Northam ordered K-12 schools shut down due to the COVID-19 pandemic, Kershasky sent the portraits on their way to The Memory Project and then to Malaysia.

The portraits arrived to the children about two weeks ago, and Kershasky and his students got to see a video of students receiving their portraits earlier this week. He said he received texts and messages from students. “They were super pumped,” he said.

“It brought everything around full circle,” Kershasky said. “You think about it being a cool adventure, and then you put in all this work and lose track of what you’re doing while you’re working so hard. And then you pack them up and deliver them, and then you’re like, ‘Well, now they’re gone.’

“And then to see the video of how it turned out, how well they were received, and then you go, ‘Oh, OK, all that hard work paid off, and there’s all these kids who were super excited to get their portraits and it made their day. It’s even better seemingly, especially with the whole coronavirus (pandemic) going on, it’s something to cheer them up.”

While they were working on the portraits, students admitted to some nerves, wanting to make sure the portraits would represent each person well and be as realistic as possible. But judging by the reactions students had to receiving the portraits from the Nansemond River students, and that of many others, they had little to worry about.

Kershasky created a webpage, “The heART of Nansemond River,” on the school’s website, which includes the portraits his students drew and then sent to Malaysia. It’s something he learned how to do while the coronavirus pandemic has kept everyone out of school.

He said this has been one of the more satisfying projects he’s been a part of. In the meantime, he’s planning on using Zoom to have students draw together, and focus on journaling and sketchbooking since not all students will have the supplies they would have in his art class. He also plans to focus on history and research, with plans to continue things like The Memory Project when classes resume.

“That was a super-duper rewarding experience,” Kershasky said. “And now that we’ve done it once, we can explain to them everything that’s going to happen, how cool it is, and now we have something that’s very personal, rather than just kind of generic things on the website. That will get the kids excited about it.

“That was one of our first projects that reached beyond the classroom, beyond the local community and then into the world,” Kershasky said. “And that in itself makes it worth doing it again.”

To see the portraits that the students in Brian Kershasky’s Art 4 class at Nansemond River High School drew of children from Malaysia, go to https://tinyurl.com/w8mrmon.

Suffolk, it’s time to get creative

Those looking for a positive creative outlet can bring their wild ideas to life for a virtual, Earth-friendly “Trashion Show”... read more