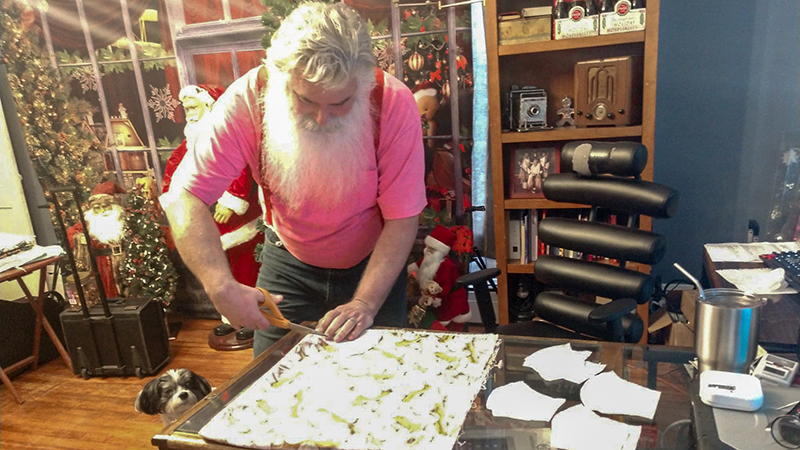 The East Coast Santa, Kenny Hydock, works on cutting out material for homemade masks in his home workshop — complete with some Christmas décor in the background. (submitted photo)

It may be April, but Santa’s workshop has been in full production mode for the last few weeks, right here in Suffolk.

Santa and Mrs. Claus, known locally as Kenny and Charlene Hydock, typically spend their holiday season making appearances as the beloved North Pole couple. But this offseason, they also have been doing their part to battle the COVID-19 pandemic by making face masks at their home.

“We’ve probably distributed close to 125 or 150,” he said on Tuesday. “We have lost count, because it just blurs together.”

The U.S. Centers for Disease Control and Prevention last week recommended that all Americans wear a cloth face covering when they have to conduct essential tasks, like working at an essential job or going to the grocery store. Hydock said he and his wife have been giving them to all kinds of people, both to health care workers to use as backups as well as to ordinary folks.

“I think there’s a lot of people that are doing what we’re doing, which is wonderful to see, because there’s a huge shortage out there,” he said.

Hydock found a pattern online, sat down with the sewing machine and made his first mask in mid-March, “just to see how hard it would be,” he said. He found it pretty easy, so he and his wife started an assembly line. They got their first big order when someone from their church asked them to make 20 masks for an assisted living facility.

The orders are now coming in fast and furious from multiple states.

“I get at least three to five requests a day,” Hydock said. “We’re doing what we can to meet those orders.”

They have an assembly line going in their house. He cuts out the inner and outer liners and takes them into the sewing room to his wife, where she sews them up. He then takes them back out and puts on the elastic straps.

They started out using material they had on hand but quickly ran through that. Since then, the Hydocks have been sewing with material they ordered on Amazon or got through the curbside pickup at JOANN.

The Hydocks have not been charging anyone for the masks, although they have asked for — but not insisted on — postage when they need to be mailed.

“I don’t feel like we need to charge for them,” Hydock said. “As long as we’re able to make them, we’ll give them away.”