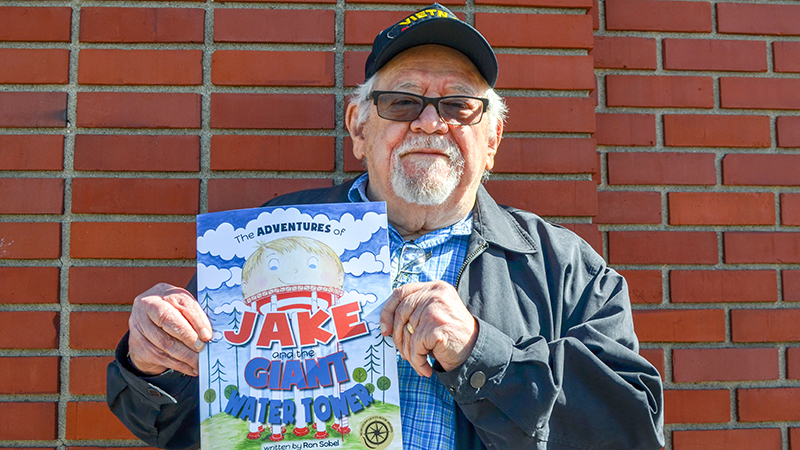 Suffolk author Ron Sobel, 83, shows off his award-winning children’s book “The Adventures of Jake and the Giant Water Tower.”

About eight years ago, Ron Sobel asked his son David what he wanted for his birthday. David, 45, lives in Fairfax, and his birthday is just two days apart from Sobel’s, 83, in September. And what did David want from his father for this particular birthday?

David wanted Sobel to write about himself, about where his father grew up and what his childhood was like. Sobel was glad to do it, but he thought he would only end up writing a couple of pages about his life.

Instead, Sobel went back as far as he could remember and wrote more than 150 pages for his son, which Sobel told him was still a “work in progress.”

“After writing that, I realized that perhaps I could write a novel of some type,” he said.

Sobel has now written several children’s books, and last fall he won an award for his book “The Adventures of Jake and the Giant Water Tower,” a story inspired by quality time spent with his grandson, Jake.

“The Adventures of Jake and the Giant Water Tower” won the Northern Lights Book Award in the Late Bloomer Author category last year. Sobel was notified via email on Oct. 15. Northern Lights winners receive personalized certificates, as well as award seals to put on copies of their books.

“The judges are confident ‘The Adventures of Jake and the Giant Water Tower’ will stand the test of time and children will be enjoying your work for generations to come,” the Northern Lights Book Award email states.

The book is about Jake, a happy little boy who loved car rides with his grandparents, known sweetly as Papa and GiGi. Jake loved rides in his GiGi’s car and also loved water towers — “the bigger the better,” according to the description on the back of the book.

“Then, one day while out riding he saw something terrible about to happen on a water tower, (and) his swift action made him a hero,” according to the description.

The book was self-published in 2018 using Amazon’s “CreateSpace,” with warmly colored illustrations by Ginny Krueger. Sobel said the process took a year from start to finish, with at least 10 face-to-face meetings and more than 200 emails exchanged between Sobel, Krueger and Susannah Donahue, the graphics designer.

Sobel’s grandson, Jake, now 14, born on Christmas Day, was the inspiration for the book’s gleeful protagonist, and the story was fueled by fond memories Sobel had of him and his wife, Faye, driving him around when he was younger. Like the book character, Jake would call them Papa and GiGi.

“He loved to see water towers when my wife and I would drive him around,” Sobel said.

The car they actually drove back then was a dark-blue sedan, but in the book the family drives around in a pink Cadillac convertible. Sobel said that he wanted just a simple illustration of a car for the book, but Krueger and Donahue insisted on a stylish pink convertible, because it looked better on the page.

That creative choice made a great impression on readers, according to Sobel.

“People would talk about the pink convertible. They thought it was a neat idea, and people that knew us saw the resemblance of my wife and myself in the convertible, so they thought that was another neat idea,” Sobel said.

Sobel also did some writing when he was in the Air Force. He served in the Air Force for 12 years and spent 25 years with the Department of Defense. After the Air Force, Sobel wrote a weekly column for the Annapolis Gazette in Maryland for three years.

He’s lived in Suffolk for 25 years now and likes to spend his time playing duckpin bowling, playing with his six-member poker group that’s been meeting twice monthly for nearly 18 years, and of course, writing.

Sobel has written three other children’s books. “The Adventures of Jake and the Christmas Tree” is a companion piece to “the Giant Water Tower,” and both “Charlie and the Time-Traveling Flip-Phone” and “The Amazing Adventures of The Whiz Kids: A Ghost in the Closet” are both for readers ages 8 to 12.

He said that winning the prestigious Northern Lights Book Award has inspired him to keep writing, which he describes in a brief biography about himself as “one part inspiration and 99 parts perspiration.”

“When I’m writing, everything else seems to be blocked out, and somehow I have total focus on it,” he said. “I kind of get in a zone, and I like that. I feel that’s the creative part.”

“The Adventures of Jake and The Giant Water Tower” and Sobel’s other children’s books are available online on the Amazon and Barnes & Noble websites. Copies can also be purchased at Jester’s Gallery Gifts, located inside the Suffolk Center for Cultural Arts in downtown Suffolk.