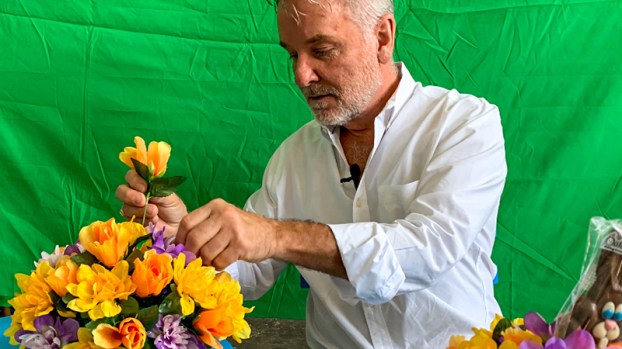 Crystal “Cri” Tiffany has an “eclectic” set of artistic skills in her repertoire. She’s been a professional artist for roughly three years, and since October she’s been in the SPARC Shoppe at OnePast7 in downtown Suffolk.

“Mostly I work with reverse painted glass, but I also dabble in making hats and laser engraving,” said Tiffany, 33. “I just got a laser engraver last year, and I’ve been having a lot of fun with that. I made an entire wooden top hat out of that.”

But Tiffany hasn’t been too creative as of late. Like others, she’s mostly been making cloth facemasks for her family and herself, ever since the coronavirus pandemic swept Virginia, the country and the rest of the world.

“I haven’t done much creating, and not only is the whole situation depressing, but not feeling up to being creative is just another layer onto the depression and everything (else). I have all this craft stuff around me, but I’m not inspired at all, because of all the stress of the situation,” she said.

That’s why Tiffany and other local artists are volunteering their time to film videos that will inspire creators of all ages, and provide some much-needed levity during the pandemic.

Suffolk artisans of the SPARC Shoppe at OnePast7 in downtown Suffolk have teamed together to create instructional videos for children, parents and grandparents. These video lessons are for crafts, cooking and art projects that can be easily done at home and with limited materials, according to a Wednesday press release.

Rick Byrd, marketing and events manager for the SPARC Shoppe, is working with Patrick Belcher of PB&J marComm on this project, according to an email Thursday from Byrd.

Artists are starting to develop their instructional videos this week. The videos will begin to appear online the middle of next week, the press release states, on Facebook, Twitter and Instagram, and also on “TheSPARCShoppe” YouTube channel.

“It felt like something I could do,” Tiffany said. “I felt like I could somehow help out. It’s like there’s so much I can’t do right now, but this is something I can do, so why not?

Tiffany is doing videos on reverse painting and how to make a bycocket.

Reverse painting involves painting glass, then viewing the image by turning the glass over and looking through the glass to see the image. Her video will demonstrate this technique using a glass frame and some paint. She also recommends that viewers use a blackline drawing to put underneath the glass for easier tracing, especially for children.

Her other video will demonstrate how to make a bycocket, a style of hat that was fashionable for both men and women in Western Europe, from the 13th to the 16th centuries. It’s more commonly known today as a “Robin Hood hat.”

“I do this demonstration a lot at renaissance fairs, because I’m a re-enactor as well,” Tiffany said. “I’ve had kids as young as 7 make these hats. Even little kids can do it, with some time and some patience.”

Tiffany hopes that these videos serve as a welcome distraction and provide a creative outlet for people staying at home.

“Maybe these small little videos will bring some enjoyment during this time,” she said.

Dommel and her children have done multiple art projects together at home over the past few weeks, recording them for her YouTube channel and sharing the videos with her Mack Benn Jr. Elementary students, to show them art projects that can be done with limited supplies — even just pencils and paper.

“We’re trying to come up with different things that they can do at home with just limited art supplies,” Dommel said.

David said his mom is a great art teacher. So far the two have worked together with clay and also on a demonstration video for origami cats. He’s excited to get creative with slime this week, too.

Listed in the press release are some of the other videos in the works, like “Basic Floral Design — Arrangements Made in Under 5 Minutes for Just $5 each, “How to Make JELLO Playdough,” and “How to Make Simple Recipes That Your Tummy Will Love.”

Viewers are encouraged to promote the videos they enjoy and to make voluntary donations to The SPARC Shoppe at OnePast7. Viewers will be promoted to text 1PAST7 to 44-321 at the end of each video. They can also press the “donate” button to make a voluntary contribution for this community project.

The SPARC Shoppe at OnePast7, 100 N. Main St. is part of the SPARC Initiative, a nonprofit that stands for Suffolk’s Premier Art, Retail and Cultural Initiative. The location is currently closed due to COVID-19 concerns.

The Port of Virginia’s March cargo volumes were down nearly 9 percent when compared with last year, according to a... read more