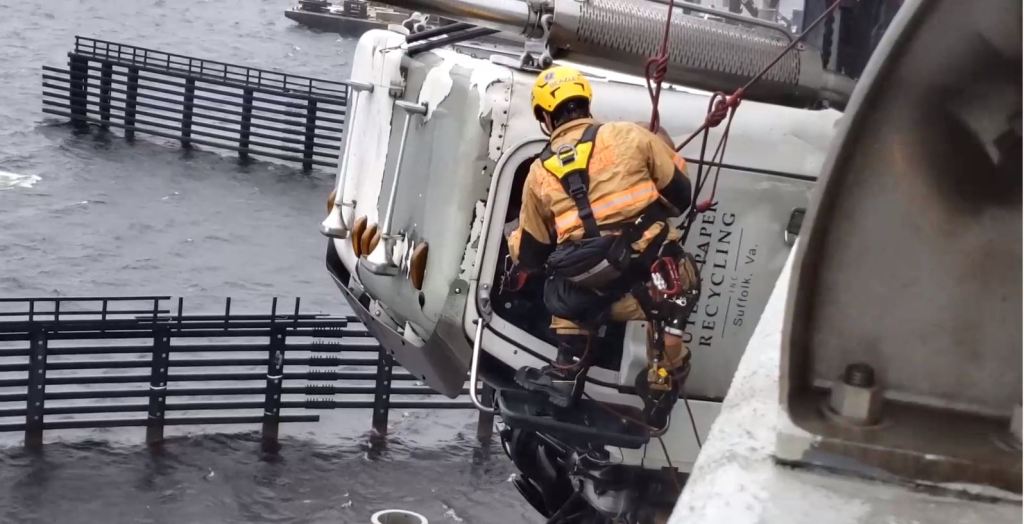 Chesapeake firefighter Justin Beazley, a member of the technical rescue team, rappels off the side of the Interstate 64 High Rise Bridge to rescue Wayne B. Boone of Suffolk, the driver of a tractor-trailer that jackknifed, hanging 70 feet above the Elizabeth River.

A Suffolk man was taken to the hospital with non-life threatening injuries following an accident on the High Rise Bridge Monday morning that left his cab dangling precariously over the bridge to the Elizabeth River.

Wayne B. Boone, who was driving a 2007 Freightliner tractor trailer westbound on Interstate 64, was traveling in the left lane when a strong wind gust pushed his empty trailer to the right lane, causing him to lose control and strike the side of the bridge around 8:43 a.m., according to Virginia State Police Sgt. Michelle Anaya.

Boone was entrapped in the cab of the truck, which dangled over the Elizabeth River before the Chesapeake firefighter Justin Beazley, a member of a regional technical rescue team, rappelled off of the side of the bridge to rescue Boone out of his jackknifed tractor trailer that was hanging 70 feet over the river, according to the Chesapeake Fire Department.

The tractor trailer was first stabilized with help from heavy equipment from Hudson’s Servicenter and Fink’s Wrecker Service to prevent additional movement, according to a Chesapeake Fire Department news release, before Beazley was lowered over the bridge to harness the driver and lift him to a safe position.

Boone was transferred to a Chesapeake medic unit at 9:47 a.m. and taken to Norfolk Sentara General Hospital with non-life threatening injuries.