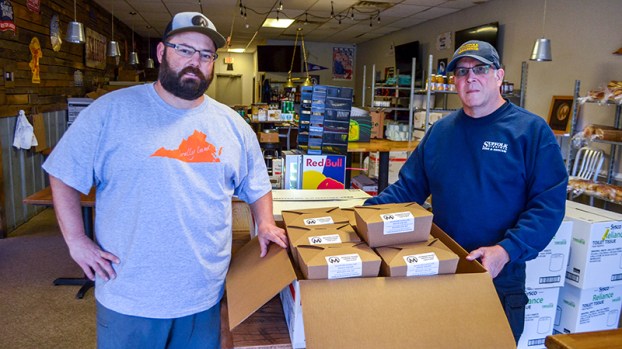 The Suffolk Ruritan Club ordered hundreds of meals from Mason’s Grill & Smokehouse and Roy’s and Ricky’s Catering to support both businesses and to buy lunch for first responders in the community.

They ordered 125 boxed meals from Mason’s and 150 from Roy’s and Ricky’s, which were picked up on Thursday morning. Roy’s and Ricky’s prepared fried chicken, potato salad, string beans and rolls for the boxed lunches, while Mason’s prepared barbecue sandwiches, chicken salad cold plates, and smoked chicken wings.

Suffolk sheriff’s deputies carefully packed the trunks of their vehicles with the boxed lunches, then delivered them to police, fire, animal control and other first responders throughout the city.

“Everybody was on time and on target,” said Suffolk Sheriff E.C. Harris, a member of the Suffolk Ruritan Club. “Within 15 or 20 minutes it’s out to the city, and in 30 minutes it’s everywhere. Everybody’s got their lunch. I’ve been getting texts. Everything’s been dropped off, and the numbers have worked out perfectly.”

There’s little respite for the men and women that continue to serve the Suffolk community during this pandemic, and each of them deserves a tasty lunch break on the house.

“They’re busy running from call to call, and we felt like if we could do a little something to make their day a little easier, (then) it would be good to do,” Harris said, “and (it lets) them know that we are thinking about them — the entire city’s thinking about them — and the job that they do, risking their lives every day.”

It was also a way for the Suffolk Ruritan Club to give back to local businesses that have deep ties in the Suffolk community.

Roy’s and Ricky’s Catering, 1328 Holland Road, has been in business for 50 years now, and owner Ricky Conner has working at the restaurant for 35 years. He’s also been a Suffolk Ruritan member for 31 years.

Like others in the restaurant industry, Roy’s and Ricky’s is doing what it can to adapt in this turbulent climate. The restaurant currently does curbside pickup and delivery six days a week, and a few weeks back they helped feed nurses at Sentara Obici Hospital in Suffolk, Conner said.

“We try to and do what we can to help everybody, but it’s been a struggle,” he said. “We’re just taking every day like we can, and we’re looking forward to when this is over.”

Conner also thanked the first responders for doing “such a great job.”

They have specials Mondays through Thursdays, including fried chicken on Tuesdays, when the restaurant puts 10 percent of sales from that day into Mason’s employee fund. This money is distributed every two weeks equally to all of the employees in order to help make up for their loss of hours, Branch said.

“We want to make sure that they’re able to survive and provide for the families.” Customers are also donating extra money for them, Branch said.

Mason’s is one of the sponsors for the Suffolk Ruritan Club Shrimp Feast, the Club’s biggest annual fundraiser that’s held at Peanut Fest. The restaurant sponsors numerous events throughout the Suffolk community. Normally once a month, 10 percent of that day’s sales go to support a local nonprofit organization, which Branch calls that month’s “community day.”

And now their goodwill is being paid back to them through their loyal customers, which Branch and his employees appreciate.

“We never thought that we would need the help that the community has provided now,” Branch said. “We sponsor several local nonprofits and the Suffolk Ruritans, (and) now it’s coming back to us. People are thinking about us when they want to order food.”

Harris said the Suffolk Ruritan Club is working on other avenues to help Suffolk businesses and employees endure this period.

Girls on the Run Hampton Roads is providing activities and exercises to its young girls who are sheltering at home... read more