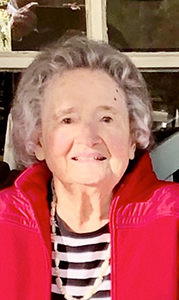 Lena Dickenson Thornton Small, devoted Christian, beloved mother, grandmother, great-grandmother, former teacher and proud lifelong Virginian, died on April 19, 2020. Born in Hampton on Dec. 12, 1925, the daughter of Robert Meaux Thornton Jr. and Lena Dickenson Eubank Thornton, Lena grew up on the family farm with her four older brothers, their dogs and ponies, and her father and stepmother, Evelyn Todd Thornton. She graduated from Westhampton College of the University of Richmond in 1947, after having earned a bachelor’s degree and making treasured, lifelong friends, with whom she held annual reunions for decades. Lena moved to Suffolk, where she taught sixth grade and met and married William Holmes Small. Together, they built their life in Suffolk, raising three children and becoming stalwarts of the local community and especially their church, First Baptist Church of Suffolk. Lena taught math at Nansemond-Suffolk Academy and at Suffolk High School until her retirement, and even decades into retirement, she would be greeted with fond appreciation by former students during chance encounters, including once while on summer vacation in a tiny town in Germany. Lena was an active and committed member of First Baptist Church, where she was the first church librarian, an active member and past president of the Women’s Missionary Union, active in many circles, as well as serving from time to time as a Sunday School teacher.

Lena was an avid “hands on” gardener who spent many spring days planting and caring for her irises and geraniums in her own yard, as well as beautifying her historic Suffolk neighborhood. Lena was an active member of the Constantia Garden Club, The National Society of The Colonial Dames of America, the Delta Kappa Gamma Teachers Organization, the Suffolk Chapter of the American Association of University Women (AAUW), which recently honored her as a founding member during its 60th anniversary celebration.

After her husband Holmes died in 2013, Lena moved to Lakewood Manor in Richmond to be closer to her children and several lifelong friends from college. She continued to be active in her new community and never stopped making new friends.

Lena was always smiling. She had an amazing way of finding the good in people and was a kind and patient supporter of so many who needed her as a friend and advocate. Her nephew characterized her perfectly when he said “her love and concern for others was obvious, and her love for her family was contagious.”

Lena will be privately buried at Cedar Hill Cemetery. For everyone’s safety and convenience, First Baptist Church of Suffolk will live stream the graveside service Saturday, April 25, 2020, at 2 p.m. on its Facebook page, www.facebook.com/FirstSuffolk. In these difficult times, the family can only accept condolences on parrfuneralhome.com. In lieu of flowers, please send your donations in memory of Lena to a charity of your choice or the Suffolk Chapter of the American Red Cross. The family hopes to celebrate Lena’s life when it is safe to gather and share precious memories.