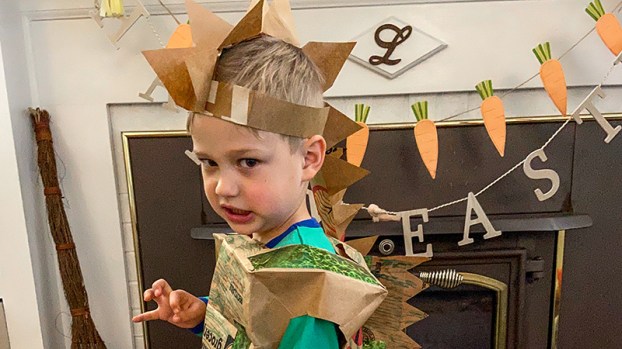 Big “Chomp” out of the competition

It was a wild competition of creative craziness, but 4-year-old Jack Lee emerged victorious, dressed in his Jurassic-best costume for the Virtual Trashion Show that was held earlier this April.

The Suffolk Public Library teamed up with the Pourfavor coffee shop on North Main Street to bring their planned in-person fashion show onto the internet, due to the coronavirus pandemic. This online Trashion Show was inspired by Earth Day this month, and participants used recyclable materials to make fun outfits and items.

The library posted a compilation video with photos of each participants’ creation on Facebook April 14, which is still available for viewing on the main “Suffolk Public Library” page.

Young Jack’s “Chomp the Dinosaur” costume won the votes, and the Lee family received the $20 Pourfavor voucher grand prize. According to Jack’s mother Emily Lee, he was very excited to win — especially because his 2-year-old brother, Henry, was also in the contest, except as an astronaut.

“We encourage friendly competition in our house, (and) we know that we don’t always get to win, but (Jack) was excited to win,” Emily Lee said.

Jack is the son of Suffolk residents Emily and Tyler Lee, and Jack and his mother used duct tape, paper bags, cereal boxes, construction paper and markers to bring “Chomp” to life. Chomp is a “Spinosaurus,” which is Jack’s favorite dinosaur for two reasons: they’re predators, and he “likes all their spikes,” Lee said.

His growling and enthusiastic dinosaur face in the submitted photograph also helped to win over the Trashion Show viewers.

“We love dinosaur-anything around here right now,” Emily Lee said, whether it’s streaming “Dino Dana” on Amazon Prime or reading the “Big Book of Big Dinosaurs,” which Emily said her son quotes facts from often. “If there’s a way to incorporate a dinosaur, we generally do.”

She also said that her family enjoyed the fun competition while they stayed safe at home during this pandemic.

“We love the (Suffolk Public Library). We’re big fans, (and) it was fun to feel connected to other people, even though we’re staying at home by ourselves,” she said.

May the 4th be with you

Builders young and old have been challenged by the Suffolk Public Library to let the Force flow through them to... read more