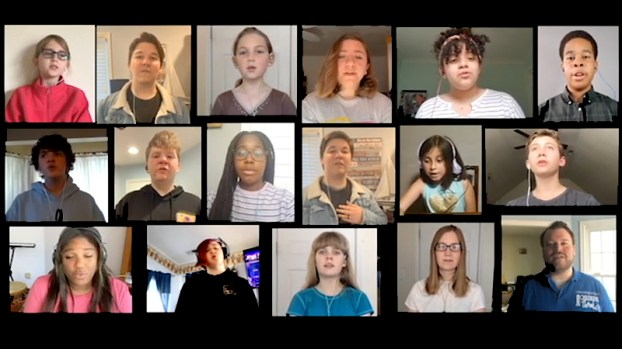 They worked on harmonies in classes this past winter, and they had planned to showcase “Seasons of Love,” along with many other songs, for their spring cabaret fundraiser this year, called “Songs That Make You Smile.”

The fundraiser was originally scheduled for March 27 as a benefit, with proceeds intended for a new portable sound system and choir microphones, the press release states, but had to be rescheduled due to the coronavirus pandemic.

While that show is being rescheduled, the Children’s Chorus found a new, virtual voice for “Seasons of Love.”

“I wanted to continue making music with the Children’s Chorus even if we had to be apart,” Director Gavin Harper states in the press release. “I had seen other choirs do virtual choirs, so I thought how cool it would be to have the SCCC do one.”

They accomplished this by recording each singing part on separate tracks and sharing the layers with the members of the Children’s Chorus. Each student made a video recording of themselves singing the song, then uploaded their videos to Google Drive.

Using the audio software Audacity, Harper mixed the voices by extracting the audio, blending the tracks and spotlighting the soloists. He then put all the choral members’ videos in Adobe Premier and edited them together to match the audio track, according to the press release.

Also credited are Music Assistant Kamaren Noel, and Harper as both the director and editor.

“The children really made my job easy,” he continues. “Their voices and harmony parts were excellent and made it so easy to mix and create. Was it a lot of work? Yes. Would I do it again? Absolutely. What an awesome thing to look back on as the children grow up to always remember their virtual choir experience!”

“We are so excited to see the reaction from the community,” Harper said in a phone interview Monday. “It’s something that we are really thrilled to be a part of.”

On behalf of SCCC, Harper gave thanks to the Suffolk Center, their families and the local community for their support of this project.

“We’re just super thankful to have this opportunity to share it, and we hope that this will be a positive light during these tough times of being isolated,” Harper said. “During this pandemic, we hope that we can show that light to the community.”

“’Seasons Of Love’ is the perfect message for these unprecedented times we are living in,” Suffolk Center Marketing Manager D’Arcy Weiss wrote in an email. “The song not only makes you smile externally, but also makes you smile internally to remember all the love around you and the love you have for others.”

Readers can enjoy the virtual performance by visiting the Suffolk Center for Cultural Arts Facebook page, or find the video on YouTube.

Open enrollment for the Children’s Chorus starts in September for ages 7 to 17. For more information, visit suffolkcenter.org/childrens-chorus.

Big “Chomp” out of the competition

It was a wild competition of creative craziness, but 4-year-old Jack Lee emerged victorious, dressed in his Jurassic-best costume for... read more