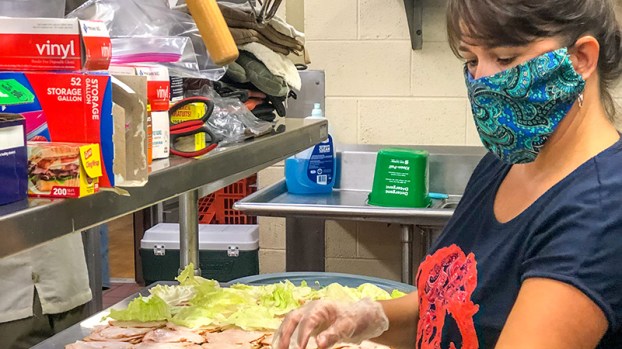 First Baptist Church volunteers have served more than 460 lunches to medical workers throughout the city. The church has also had members making masks and face shields for medical personnel, with one of its members using a 3D printer to create shields for medical, food and retail workers. (submitted photo)

Lunches ‘a breath of fresh air’

Mary Williams said the lunches First Baptist Church delivered to the Specialists for Women office on Hillpoint Boulevard North saved she and her co-workers the logistical headache of finding a place open for lunch, going to get it, and then have little time to enjoy it before having to get back to work.

And, without having to go get lunch, it allowed for more time to socialize with colleagues.

“Everyone was just so excited when I was able to tell them, ‘Hey, First Baptist is going to come to bring us lunch,” said Williams, a nurse practitioner at the office. “And they said, ‘Oh goodness, do we need to pay? And how much do they want for it?’ And I was like, ‘Nothing.’

Williams explained to her co-workers that they just wanted to serve in the manner they felt called to do.

“It was like a breath of fresh air having someone bring that to us,” Williams said.

First Baptist Church volunteers have been preparing and delivering lunches to medical offices around the city three times per week — Tuesdays, Wednesdays and Fridays — since April 3, and plan to continue doing so for the foreseeable future, according to Associate Pastor of Missions David Edgell.

Through April 24, more than 20 church volunteers have prepared and delivered more than 460 lunches to medical offices throughout the city, following Virginia health standards and COVID-19 food safety protocols.

Edgell said after an April 2 conversation with Dr. William Jackson of Sentara Family Medicine Physicians on Godwin Boulevard, he came up with the idea of bringing lunches to their office as a way to boost morale and lift the spirits of the office staff.

It had the desired effect.

Besides the lunch of a turkey sandwich, chips, granola bar, an apple, chocolate chip cookie and a bottle of water, the volunteers attach a card to each lunch.

It reads: “We have this thought today. You’re really awesome. Thank you for all your hard work taking care of the sick during these days, we wanted to let you know that you’re in our daily thoughts and prayers. First Baptist Church.”

That first day, which came the day after Edgell’s conversation with Jackson, First Baptist fed about 30 people, and since then, volunteers with the church have kept feeding people who work in medicine around the city.

The church brought lunch to Specialists for Women next, and got a similar reception.

“I got great feedback from both of those doctors who called and said, ‘Oh, you wouldn’t believe. That just picked everybody up. They enjoyed it. It started some conversations that we needed to have in the office,’” Edgell said.

Williams, who also is a nurse midwife who goes to a hospital several times per week to deliver babies, said the changes as a result of the coronavirus pandemic have had a draining effect on her and the staff.

“Having been a part of being in the office, seeing … pregnant people, and having to go into the hospital (with) so many changes, wearing a mask everywhere you go and just being really careful and having to put on a million different things for deliveries, it’s all just — it’s really been such a change in the way that we normally practice.

“We’re usually a happy office where you come in with your husband and your family, and you get to see an ultrasound of your baby, and now it’s like, ‘OK, you have to come in by yourself, no family members can come in with you,’ and it’s really been such a different atmosphere in our office that it was just really nice to see something happy.”

Jackson told Edgell that he keeps a copy of the card at this monitor to remind him why they do what they do.

First Baptist volunteers have dropped off lunches to various medical offices in the city, along with the Western Tidewater Free Clinic and Sentara Obici Hospital’s emergency department.

“It’s just grown, and we’ve just tried to really say thank you to the folks that are doing so much to meet the medical needs right now,” Edgell said.

Currently, the church is trying to reach all of the city’s medical offices, and it plans to cycle around and bring another round of lunches as long as it has the fundraising support needed to sustain the program. At a cost of $2.50 per meal, Edgell said it costs the church about $370 per week to provide the lunches.

Because it had a current restaurant license thanks to the daycare the church used to have, it was able to ramp up to serve the lunches quickly, and it consulted with the Suffolk Health Department to ensure it was following proper protocols in the wake of the coronavirus pandemic.

“For us, we have a lot of (members) that are working these offices, and we want to give them opportunities to be able to have conversations about not just physical and emotional things, but spiritual things as well,” Edgell said, “and so I think it’s really allowed our members to engage in conversations with fellow employees as well.”

First Baptist Church is accepting donations to feed medical workers throughout Suffolk. To donate, go to www.fbcsuffolk.org/give and use the e-giving link, then write “Medical Food” in the memo line. People can also mail a check to the church and designate it for “Medical Food.”