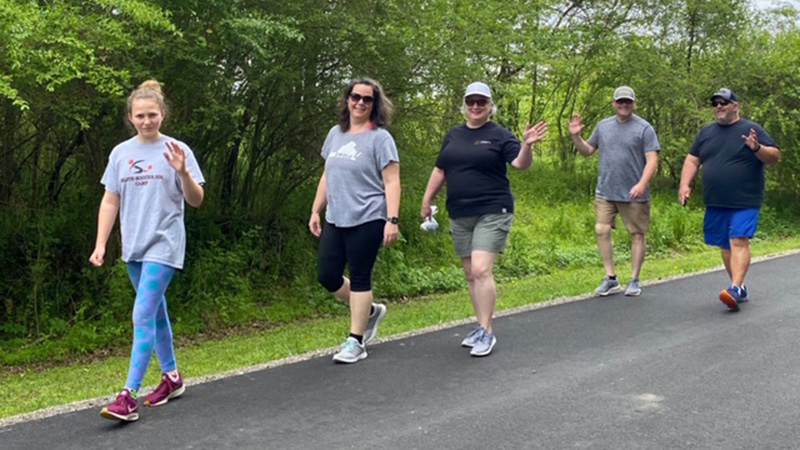 Many recreational facilities in Suffolk have closed to the public due to COVID-19 concerns, which is partly why many Suffolk families are now spending more of their newfound free time outdoors at their local parks, instead.

“I think we’ve seen a much higher volume of activity at the parks than we typically see this time of year, and I think that can be attributed to the fact that the parks are pretty much the only recreation that’s open to the public,” Suffolk Parks and Recreation Director Mark Furlo said in a phone interview Thursday.

Recreation spaces like basketball courts and playgrounds have been closed, but Suffolk Parks and Recreation is still offering numerous activities for visitors in need of fresh air during this pandemic, including tennis courts, dog parks, trails, skateparks, fishing piers, canoe and kayak launches, and more.

The majority of activity that he and his team have seen has been walkers, cycling and fishing. Ruggiero said almost every day, depending on the weather, he and his team find every boat ramp at Lone Star Lakes Park being used.

There are also plenty of families coming out to places like Bennett’s Creek Park to enjoy afternoon lunch as a family, Ruggiero said.

Suffolk parks have become so popular during this pandemic that the Parks and Recreation personnel are having to do maintenance twice as often, and with fewer staff for each task, due to social distancing guidelines.

It starts first thing in the morning with trash pickup. According to Ruggiero, there’s been more ground litter at all Suffolk parks. It’s now gotten to the point where it could take up to two hours to clean up in the morning, depending on the weather and day of the week.

“That’s about as twice as long as it takes usually,” Ruggiero said. “Usually we have it done in an hour and a few (minutes).”

There’s also regular park maintenance, like cutting grass in parks and on trails.

“The parks are always cut every week, (and) the trails usually every other week, (but) now we’re doing the trails every week as well,” he said.

Trails are also having to be maintained more often because of their newfound popularity, especially the Suffolk Seaboard Coastline Trail.

The Suffolk Seaboard Coastline trail saw 3,519 bikes in March, which rose sharply to 5,966 bikes in April as of Tuesday, according to Helen Gabriel, assistant director for Suffolk Parks and Recreation. These numbers were collected using the Eco Counters on the trail.

With this surge in activity in mind, Suffolk Parks and Recreation is asking visitors to be mindful of their trash. It’s about keeping the parks clean, but it’s also a matter of safety during the pandemic, because staff have to be careful when they are collecting someone else’s potentially-contaminated trash, Ruggiero said.

“Our parks are beautiful, and we want to keep it that way,” he said.

Ruggiero encouraged visitors to go out and enjoy their local parks — as long as they’re following social distancing guidelines and being respectful of their surroundings. He said he likes seeing these families spend so much time together at their local parks this time of year, and throughout the whole week, too, not just on the weekends.

“It’s nice to see families get together more often and enjoying the outdoors. It’s just unfortunate that a pandemic has to be the cause of that,” he said.

Visit suffolkva.us/266/Parks-Recreation for more information, or on Facebook at facebook.com/SuffolkParksandRec.