The Wright stuff for postal work 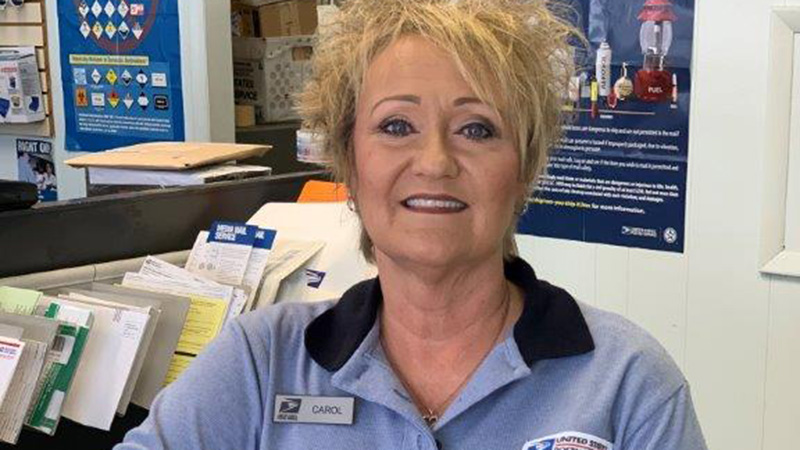 Carol Wright, who worked for the U.S. Postal Service for nearly 35 years, is retiring Thursday. She worked at the Main Street, Chuckatuck, Driver and Whaleyville post offices during her tenure. (submitted photo)

Over the past few days, Carol Wright has been saying goodbye to many of the people she has worked with during her 35 years working for the U.S. Postal Service, many of those years at the Main Street post office in Suffolk.

Under normal circumstances, Wright, 56, would be able to say those goodbyes with a party on her final day, but when that day comes Thursday, due to restrictions against large crowds during the coronavirus pandemic, she won’t be able to do that, and instead has been doing so on an individual basis.

“It’s kind of sad that we can’t have a little party, and things like that because we can’t gather around,” Wright said. “And a couple of people that weren’t going to be here this week, last week they were saying goodbye, but they were like, ‘Oh, I can’t even hug you.’ It’s kind of weird.”

Wright’s foray into postal service work began as a lark.

Wright, a lifelong Suffolk resident who grew up in the Reid’s Ferry area, graduated high school at Nansemond-Suffolk Academy. She had been working at Village Drug in Chuckatuck while still taking classes at Tidewater Community College in Portsmouth, studying to become a secretary. During her time in that job, she made regular trips across the street to the post office.

While there, N.T. Poarch, the postmaster there at the time, suggested to Wright that she take the postal exam, something she didn’t seriously consider until a friend of hers who had been taking classes with her at TCC casually mentioned that she wouldn’t be going to class one day because she was taking the postal exam.

That’s when Wright suggested the two take the exam together, and afterward, she was offered three different positions. One was as a rural carrier, but she had to rule that out because she didn’t have a car at the time. Another, as a city carrier, was ruled out for her because the postmaster at the time told her she was a bit too small to carry a satchel. However, he did have a clerk position opening soon.

So she took the third option, as a clerk, at the age of 21, and didn’t look back.

“I didn’t have any intention of working at the post office, but here I am,” Wright said.

She left what she described as her dream job of being a secretary after just five months, and turned the postal service into a career.

And though she did spend much of her time at the Main Street post office, she also worked at post offices in Chuckatuck, Driver and Whaleyville, which was just right for Wright. Her parents, Clint and Trudy Stevenson, still live in the city, as do her in-laws.

Wright remembers her time with the postal service fondly and treasures the many relationships she made — especially the one with her husband, Jamie, who she met while working at the post office. They’ve been together 26 years and will celebrate their 20th wedding anniversary in July.

“The post office has been really good to me,” Wright said. “It’s been a good place to provide for my family.”

She chuckles about another close friendship she made while working for the postal service, with Lee Ann Hedgepeth-Hinton, who retired in July 2015.

When she would walk downtown, people would call out to Carol, but instead of calling her by her name, they would call her Lee Ann. This continued even after Lee Ann retired.

“My whole career, everybody has thought that I was her,” Wright said. “Somebody would see me out in public and they’d say, ‘Hey Lee Ann, how are you doing?’ I’m like, no (I’m not her). And then when she retired, everybody was like, ‘Hey, congratulations on your retirement.’ I’m like, ‘No, I didn’t retire. That was Lee Ann.”

Wright remembered when she started, everything in the post office was manually done, as the windows did not have computers. Like many at the time, she was considered a part-time worker, even though she worked full-time hours on the Main Street office’s main office window, transitioning to a secretary, and then after her time away from the Main Street post office, she returned as its secretary once again.

“People would always be surprised if they came in, thinking that it’s really an easy job, but it’s not as easy as everybody thinks that it is,” Wright said.

She said she enjoyed dealing with the public.

“I actually do like the retail part of it, waiting on customers and helping them figure out what’s the best thing for them,” Wright said. “And I will miss that interaction, not only with the customers but with my co-workers. There are a lot of sweet co-workers here.”

She said the unknown with the coronavirus has been a bit unsettling and has made for a new normal. While work protocols — such as wearing masks, putting up Plexiglas at the counters and staggering schedules to keep everyone from having to be in the building at the same time — were instituted, it was difficult to not be able to gather once more to say goodbye and hug everyone, especially given her impending retirement.

Still, she said it has been a long 35 years, and she’s ready to do different things — at her own pace, even if she is unclear yet exactly what those things will be. She has no ready answer other than this: she is ready to retire.

Thirty-five years is enough, having reached the minimum retirement age of 56.

She does plan to spend more time with her family in the city, and also visiting her daughter Roxanne, who lives on the Outer Banks of North Carolina. She did admit to a dream of doing more with painting and crafts.

“Everybody says you’re going to get bored. We’ll see.”