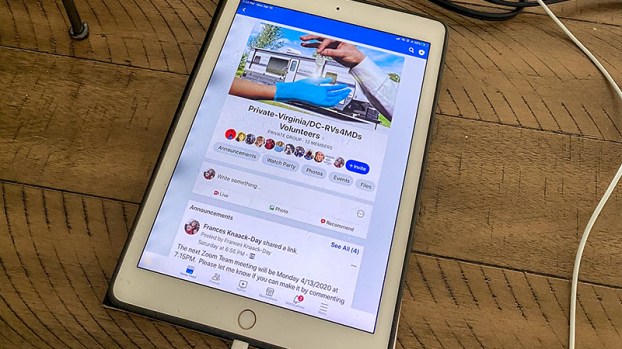 The "RVs for MDs To Fight the Corona Virus" Facebook group began with a doctor's family in Texas and is being used by people in many areas, including Suffolk. (submitted photo)

Like many families, Frances Knaack-Day and her husband Justin Day had to make a plan to keep theirs safe during the coronavirus pandemic.

Justin is a U.S. Navy lieutenant commander and a physician at Navy Medical Portsmouth, specializing in radiology. Frances has had major surgeries and hundreds of procedures in the past due to a childhood ingestion of lye, which caused lung damage and chronic lung aspiration pneumonia — all of which makes her a high-risk individual for COVID-19, the disease caused by the coronavirus. They also have four children to consider, ages 8 to 23.

Frances needed to find a way for her husband to self-isolate. Fortunately, she came across an article about the “RVs 4 MDs To Fight the Corona Virus” Facebook group.

“I thought this was perfect,” Frances Knaack-Day said. “(Justin) could self-isolate and we wouldn’t have to worry about him coming home from the hospital.”

She made her first post on the RVs for MDs Facebook page on March 28 and quickly received a response from someone with an RV to provide. But they ended up passing the opportunity along to other families in need.

“(Justin) reminded me that there were much more front-line health care workers that probably needed this more than we do,” she said, and so she shared it with their friends in the military and medical field.

The more Frances Knaack-Day shared, the more questions she needed to answer for people, and the more she forwarded those questions to the “RVs for MDs” organizers.

Now, Frances Knaack-Day is the state director of Virginia for the “RVs 4 MDs To Fight the Corona Virus” Facebook page. She said that it feels great to help flatten the curve. She doesn’t feel as helpless as when virus began sweeping the United States, and now, she’s able to refer her friends and family in health care that need to protect their families, as well.

“I have been through so much medically and wanted a way to help pay it forward to a community that has taken care of me throughout my lifetime of complicated medical needs,” she wrote in an email. “It has been so rewarding to work with this group of volunteers and to be a part of something that has quickly grown and taken off.”

According to an April 11 press release, RVs for MDs began with Emily Phillips, wife of emergency room physician Dr. Jason Phillips, in Texas. Emily posted to friends and family on Facebook for any possible connections to temporary housing for her husband during the pandemic.

The press release states that Emily swiftly connected with a friend, who connected her with another friend Holly Haggard. By 5 p.m. that day, Emily and Jason Phillips picked up an RV from the Haggard family to begin a new way of temporary living.

“I didn’t give it a second thought,” co-founder Holly Haggard states in the press release. “We had my mom’s camper in the shop, so I checked with her first to make sure it was OK, and then contacted Emily to tell her she could use it for as long as she liked. The only thing I asked of her, was to please pay it forward.”

The official “RVs 4 MDs To Fight the Corona Virus” Facebook page was then formed on March 24. Its popularity has swelled, with Haggard and Phillips recruiting even more volunteers to join their mission. People worldwide are commenting, sharing and stepping up to help, the press release states.

“People are coming out of the woodwork that once felt powerless — and now they have purpose,” Phillips states in the press release.

Run entirely by volunteers, the relief effort is designed to be a “matching service” for no-cost, temporary housing solutions to the heroes working on the front lines of the pandemic. The group is now matching donors and recipients in all 50 states, plus Canada, Australia and Dubai.

The mission of RVs 4 MDs is to connect RV owners willing to donate their mobile accommodations to front line health care workers and first responders in need of a safe place to quarantine, in order to protect their own families during the pandemic.

“It doesn’t matter how you vote, or what your race, religion, or social status is … this is all about love and kindness,” co-founder Holly Haggard states in the press release. “This is what America should be about. Complete strangers coming together, offering help to someone they’ve never met, and changing lives forever.”

Search for “RVs 4 MDs To Fight the Corona Virus” on Facebook for more information.