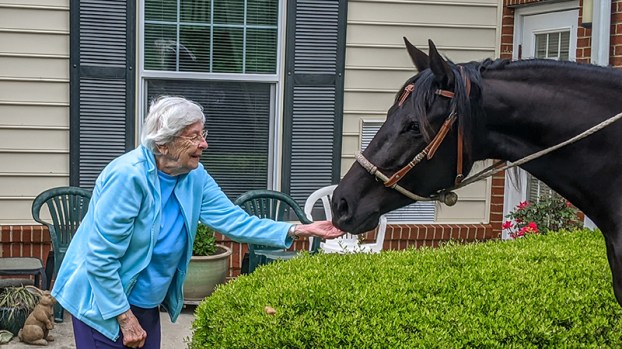 Betty Dickinson feeds one of the horses from Kay’s Acres during Friday’s horse parade at the Lake Prince Woods senior living community.

Betty Dickinson had just finished listening to a detective story with horses central to its plot, so she was primed and ready when the horses from Kay’s Acres paraded by her Lake Prince Woods apartment Friday.

“This is exciting,” Dickinson said of seeing the horses. “We haven’t had anything exciting for a couple of months. Everyone’s been stuck in their apartments.”

Four horses paraded around the vast senior living community for more than an hour as residents watched from their windows, driveways and patios. Before riding, Flo Hobbs, Lake Prince Woods’ life enrichment director, presented the riders from a gift basket of fruit, which the horses immediately seized upon and enjoyed before heading out on their journey.

Hobbs said having the horses parade through the community was a boost to everyone’s spirits, and it was something that worked well with social distancing restrictions.

“Seeing the horses was a real treat for our residents,” Hobbs said. “As a community, we are becoming more creative on programs that residents can enjoy from their homes.”

Romaine Jones was one of the residents outside in her driveway waiting for the parade of horses to come by, and she patted a couple of them as they ambled up her driveway. She’s seen the horses come through Lake Prince Woods before, but said she was especially happy to see them again.

Many residents who were inside waved to the horses as they stopped by their windows. Many others stood at the end of their driveways to greet the horses, while others waved from their patios while taking photos with their smartphones.

All expressed their appreciation and thanks for being able to see the horses parade through their neighborhood.

Neighbors Sarah Newsom and Jane Sommers stood in Sommers’ driveway, more than six feet apart, talking to each other as the horse parade went up and down their street. Both said they were thankful for the horses coming.

“It was a real treat,” Newsom said. “It gives us something new to speak about and look at. We’re all house-bound right now.”

They all said they missed gathering together and spending time with one another, and look forward to a day when they’ll be able to do that again.

Dickinson said that, as a people person, she misses being able to have more conversations with people, and misses the community’s daily happy hour. That’s why she likes to sit on her patio when the weather is nice and hopes for people to come by. But the horses were a respite from the social distancing, for Dickinson and for all the residents.

“Once in a while, somebody will come by if I’m sitting on the patio,” Dickinson said. “They can’t come in. And the worst part is I have to eat by myself — three meals a day.”

FedEx Ground-ed? Deliveries not getting to destinations

Your guess is as good as his when it comes to whether Tidewater Tire Center owner Tim Drames will get... read more